Serbia’s inflation speeds up to 2.8% y/y in April 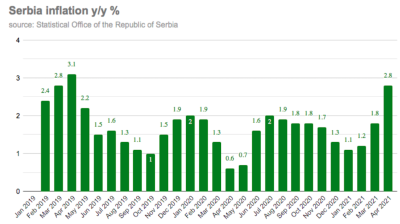 Serbia’s consumer price index (CPI) went up by an annual 2.8% in April, accelerating from a 1.8% increase a month earlier, the statistics office said on May 12.

Inflation in Serbia has been speeding up gradually since the beginning of the year, but Raffeisen analysts say they do not expect the central bank to raise rates at its upcoming rate-setting meeting as the recovery from the coronacrisis is still at an early stage.

In annual terms, the biggest increase of CPI prices were registered in the transport sector, by 5.7%, followed by alcoholic beverages and tobacco (+5.4%), housing, water, electricity and gas prices (+4.5%) and recreation and culture (+4.4%).

Food and non-alcoholic beverages prices moved up by an annual 1.7% in April.

Only prices of clothing and footwear dropped year on year in April, by only 0.1%.

"A higher inflation print is something that the [National Bank of Serbia] NBS expected, due to the higher oil prices from the global oil price correction," wrote Raiffeisen analysts in a note.

"However, we expect that there is no need for inflation fears, given that the economic recovery is still at the start and the output gap is still negative. We maintain our expectation of no rate decision at tomorrows' key rate setting meeting (1%), given the stable exchange rate, inflation being in the target range and still to some extent base effect driven, stable and low inflation expectation and sufficient fiscal stimuli for the economy that is being implemented currently (€2.1bn)."