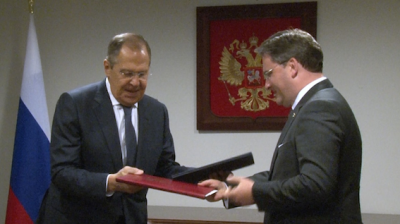 A consolation plan was signed by the foreign ministers of Russia and Serbia, Sergei Lavrov and Nikola Selakovic. / mfa.gov.rs
By bne IntelliNews September 25, 2022

Members of the European Parliament warned Serbia on September 25 that Belgrade’s signing of a consultation plan with the Russian foreign ministry puts its EU accession progress at risk.

The consultation plan for the years 2023-2024 was signed by the Serbian and Russian foreign ministries on the sidelines of the UN General Assembly in New York on September 24, at a point when Russia appears to be making a serious escalation of the war in Ukraine.

This weekend, referendums are taking place in Russian occupied parts of Ukraine on whether to become part of the Russian Federation. The conduct of the referendums, with some voters reportedly forced to polling stations at gunpoint, leaves little doubt that the decision has already been made to annex the territories. This follows Russian President Vladimir Putin’s announcement of  partial mobilisation in Russia on September 21.

As an EU candidate country, Serbia has already come in for criticism from EU officials and European politicians for its refusal to impose sanctions on Russia, in line with EU foreign policy. Pre-war, Belgrade pursued a successful ‘four pillar’ foreign policy, balancing its relations with the EU, the US, Russia and China, but this has become hard to maintain after Russia’s invasion of Ukraine in February.

The European Parliament's rapporteur on Serbia Vladimir Bilcik wrote in response to the signing of the agreement: “As a keen supporter of any steps towards a European Serbia, I find the news of planned consultations between Serbia & Russia a major blow to accession process in the Western Balkans. Let’s be clear: Russia is mobilising to attack EU candidate state Ukraine, Russia is attacking EU enlargement!”

“This is a serious scandal. In the midst of raging war, the Ministry of Foreign Affairs in Serbia signs the plan on future collaboration with the Russian aggressor. Or maybe it’s just a signal for us to freeze the EU accession talks as entering the EU does not go through Moscow,” she wrote.

The consolation plan was signed by the foreign ministers of Russia and Serbia, Sergei Lavrov and Nikola Selakovic.

At a press conference on September 25, Selakovic appeared to downplay the importance of the document, calling it a “technical matter” and pointing out that such documents have been signed since 1996.

In a sign of the conflicts within Serbia over its relations with Russia and the West, Selakovic told the same press conference that Belgrade cannot accept the results of the referendum in the Ukrainian regions.

“[I]t would be completely contrary to our national interests, our policy of preserving territorial integrity and sovereignty and commitment to the principle of inviolability of borders,” he said — a reference to Serbia’s own situation related to Kosovo’s unilateral declaration of independence.

There is speculation that the signing of the consultation plan with the Russia foreign ministry was intended to send a signal that Serbia is not moving decisively towards the West, despite its decision not to recognise the referendums in Ukraine.

Serbia also sent a message about the priority it places on EU accession last weekend when it hosted the EuroPride 2002 parade in the face of strong opposition from the Serbian Orthodox Church and conservative groups linked to Russia.

However, there remains a strong pro-Russian contingent in Serbia.

Interior Minister Aleksandar Vulin, one of the more pro-Russian members of the Serbian cabinet, responded to Bilčik on September 25. “[T]he territorial integrity of Serbia is being attacked by 22 member states of the European Union, recognizing the fake state of Kosovo. Let's face it, this is a big blow to Serbia's European path,” said Vulin, as quoted by N1.

“[T]o be clear, Serbia chooses its friends, and its enemies make themselves known,” he added.

Vulin has previously clashed with Energy and Mining Minister Zorana Mihajlovic, when the latter criticised Lavrov after Vulin’s visit to Moscow in August. Mihajlovic has accused the Russian foreign minister of “abusing” Serbia’s decision not to impose sanctions on Russia by falsely claiming Serbia supports Russia's invasion of Ukraine.

Meanwhile, Misa Vacic, the leader of the far-right nationalist Serbian Right party, is one of the international observers for the referendums in occupied Ukraine. Vacic is currently in Volgograd where he is observing the vote at refugee camps housing people who have fled Ukraine but are still allowed to vote in the referendum, Russian and Serbian media reported.

During his visit, Vacic reportedly presented the deputy governor of the Volgograd region with a T-shirt bearing the image of convicted war criminal Ratko Mladic.

Ukraine anti-corruption officers raid home of Kolomoisky
2 hours ago
Bulgaria starts construction of gas link with Serbia
11 hours ago
RBI's 2022 profits soar to €3.6bn, with Russian operations representing more than half
1 day ago
Hawkish Iran helped stop larger Azerbaijani attacks says Armenia
1 day ago
Only Hungary and Russia heading for recession in 2023 as Emerging Europe shows its resilience
1 day ago