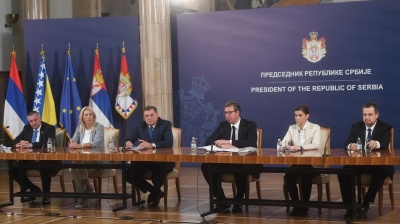 Bosnian media reported a few days ago that Dodik sent Vucic documents, which he claimed proved that Republika Srpska has been discriminated against in comparison to Bosnia’s other entity, the Muslim-Croatia Federation. Moreover, Dodik said that the status of Republika Srpska should be equal to that of Kosovo, which declared independence from Serbia in 2008 and has broad international recognition.

Dodik has repeatedly talked of independence for Republika Srpska, even going so far as to push for an independence referendum.

However, at a press conference on August 26, Vucic said that Serbia respects the status of Republika Srpska as defined by the Dayton peace agreement that put an end to the bloody 1992-1995 Bosnian war. According to the agreement, the country is divided in two autonomous entities – Republika Srpska and the Muslim-Croat Federation.

Vucic also said that he will not hold talks in Washington on Republika Srpska’s status, rejecting rumours published in some Bosnian media in the past days.

While Vucic refused to back Dodik’s secession ambitions, there was more positive news for the Bosnian Serb politician on the economic front.

At the press conference, held after a meeting with Dodik in Belgrade, Vucic said that Serbia and Republika Srpska should complete the construction of a new airport near the town of Trebinje in Republika Srpska by March 2022.

Vucic announced that his country is interested in building an airport in Herzegovina, part of which is in Republika Srpska, to secure a better connection between the two states. The airport whould be located between the towns of Trebinje, Bileca and Gacko.

Although Serbia wants to be the owner of the airport, the project will be implemented jointly with Republika Srpska.

Vucic also said that Serbia is interested in participating in the renovation of the airport at Banja Luka, the administrative centre of Republika Srpska. Bosnia and Serbia will also set up a joint industrial zone.

Bosnia's exports in 2020 amounted to BAM10.5bn, trade deficit to BAM6.3bn
Western Balkans citizens legally resident in EU equal to 14% of region’s population
BALKAN BLOG: US approach to switch from quick-fix dealmaking to experience and cooperation