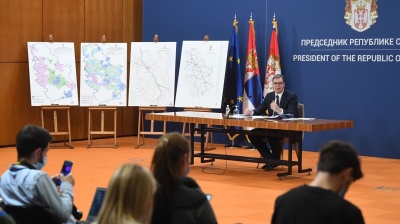 By Eldar Dizdarevic in Sarajevo December 9, 2021

The Serbian government decided at a session on December 8 to withdraw controversial amendments to the Law on Expropriation.

The law had sparked two weekends of mass protests and road blockades by environmentalists and other Serbians who argued it was tailored to mining company Rio Tinto, which is seeking to develop a huge lithium mine in the country.

The changes to the legislation — due to have been signed into law by President Aleksandar Vucic on December 10 — would have made it easier and quicker for the state to take over private property if it was considered to be in the national interest.

The government now plans to analyse whether amendments to the Law on Expropriation are necessary and, if it is determined that the law needs to be changed, it will be done with a broad public debate involving the professional public, professional associations, business and civil society, said the government in a statement.

Vucic appeared to distance himself from the law and cast blame onto government officials in an address to the nation late on December 8. He said there had been insufficient discussion on the legislation due to the coronavirus pandemic, then added: “I found other things in the law that are not good, I saw a constant mania of ministers to interfere in everything and take over certain competencies where they should not be.”

At the same session, the also government proposed amendments to the Law on Referendum and People's Initiative.

This also relates to the Jadar lithium project as the government has promised a referendum on the project.

Legislation had previously been approved scrapping the threshold for voter participation in referendums; previously referendums were only valid if at least 50% of registered voters cast their votes.

The government plans to amend several articles of the law, including by abolishing the fee for the verification of signatures and clearly enabling representatives of the authorised proponents of the referendum to be part of the body for conducting the referendum, the statement said. According to the proposal, it will not be possible to call a referendum on the same issue in less than four years. Also, the National Assembly of the Republic of Serbia will not be able to make a decision that differs from the one confirmed in the referendum within four years.

However, Sasa Radulovic, leader of the opposition movement Enough is Enough, said he believes that this move by President Vucic and the government is just a tactical retreat. He also noted that aside from the Rio Tinto project, the government plans to hold a referendum on amending the constitution in January.

“This is just a tactical retreat and a ridiculous reason. The confiscation of private property for the needs of a foreign investor still remains. The law on referendum has been passed. [Vucic] may be complemented tactically, but the essence remains — a referendum for amending the constitution remains for 16 January," he wrote on his Facebook profile.

“The only way to bring down a referendum for the amendment of the constitution on 16 January is to … get the voters to vote NO,” added Radulovic.