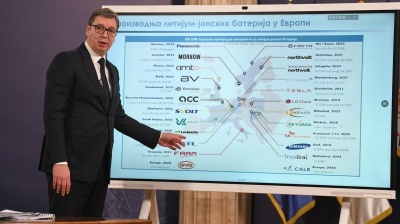 Serbian President Aleksandar Vucic has accused rivals of international mining company Rio Tinto of being behind protests at the end of November that resulted in clashes between demonstrators and police in several cities.

Rio Tinto is seeking to develop the Jadar project in Serbia which, it says, will turn it into Europe’s largest producer of lithium for at least 15 years. The metal is in increasing demand as an input for electric vehicle batteries and smartphones and other consumer electronics.

The Serbian government is keen for the project to go ahead, but it faces strong opposition from environmental groups and residents of the area.

Days after the protests on the weekend of November 27 and 28, Vucic made an extraordinary address to citizens, saying he wanted to present to the public “the complete truth” about the Rio Tinto project and the planned exploitation of jadarite, which contains lithium.

At the presentation he made the surprising claim that the protests had been backed by rival European companies as the race to exploit lithium deposits heats up.

"Among the companies that produce lithium are well-known European companies, but also a large number of Chinese companies. There is a real war going on. One of the reasons for the riots and the huge money invested in Serbia is precisely that [the lithium] is [worth] a huge amount of money,” Vucic told Serbian citizens, according to a statement on the presidency website.

He argued that environmental groups are “not campaigning against lithium, but against Rio Tinto because European countries that send money want another company to take over [Serbia’s] lithium, not Rio Tinto, especially when it comes to companies from Germany."

Serbia has large deposits of the mineral jadarite, which contains lithium, in the area between Loznica and Krupanj

Following strong public pressure, the government said a referendum can be held on whether the project will go ahead, but only after the environmental impact study is completed.

“Serbia has lithium, and whether it will use it is another matter. We need to talk to the people about how and when. If the environmental impact study is bad, I will change my mind. That is my position,” added Vucic.

There were protests in Belgrade, Novi Sad and other towns on November 27 against legislation demonstrators said favours foreign investors — specifically Rio Tinto. The protests concerned two steps by the authorities. The first is changes to the rules on referendums that environmental and civil society groups say will in practice block initiatives to prevent polluting projects by introducing high administrative fees. Secondly, protesters oppose Serbia’s new expropriation law that enables speedy mandatory acquisitions of private land by the state. There were several clashes between police and protesters, who blocked roads and bridges.

This was followed by a mass protest in Belgrade on November 28 against air pollution in the Serbian capital.