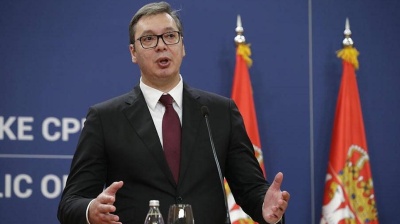 Serbian President Aleksandar Vucic held talks with international diplomats on the normalisation of Serbia's relations with Kosovo.
By Valentina Dimitrievska in Skopje January 22, 2023

Serbian President Aleksandar Vucic hinted on January 21 that an agreement on the normalisation of Belgrade’s strained relations with Kosovo is possible, but he admitted to reservations on “one important issue”.

Giving the statement after meeting representatives of the EU, US, France, Germany and Italy the day before in Belgrade, Vucic did not elaborate, but he has repeatedly said in the past that Serbia will never recognise Kosovo as long as he serves as a president and will not accept it joining the UN or the EU.

Vucic said on Instagram that the talks with international representatives focused on the French-German proposal for a solution to the longstanding conflict, were very difficult, but that he did his best to protect Serbian interests.

“[W]e are ready to accept the concept and to work on the implementation of the proposed agreement, with the fact that I made one thing very clear and expressed concerns and reservations on one important issue, but I cannot talk about it, because the proposal is not public,” Vucic said.

Vucic pointed out that everyone at the meeting agreed that a frozen conflict is not a solution.

“[W]hen you have a frozen conflict, it is only a matter of time when someone will unfreeze it and when irresponsible individuals will trigger a collapse of the peace and stability of the entire Western Balkans,” said Vucic.

“Yesterday (January 20) was one of the most difficult days for our country and I have never hidden from people in Serbia when such things happen. We will have many hardships and problems that we will face in the future, that's why we need unity,” Vucic said in an address to the people via Instagram.

In the meantime, the government called a special session on Kosovo for January 23, which Vucic will attend.

At the beginning of Friday’s meeting, Vucic posted a joint photo on Instagram with the EU's special envoy for the Belgrade-Pristina dialogue, Miroslav Lajcak, the US envoy for the Western Balkans, Gabriel Escobar, the foreign policy advisers of the French president and the German chancellor, Emmanuel Bonne and Jens Plotner, as well as diplomatic adviser to the Italian prime minister, Francesco Talo.

Most of the comments on the Vucic’s post were in support of the president and criticised what they said was EU-US pressure on Serbia to find a solution to its dispute with Kosovo.

“We all know very well and see what humiliations and ultimatums our president endures for and on behalf of Serbia,” one comment said.

Vucic’s hint that the concept of the proposal will be reviewed triggered harsh reactions from Serbian opposition politicians, who accused the president of working secretly.

Serbian PM Ana Brnabic, meanwhile, confirmed that Vucic clearly and unequivocally stated that Serbia is ready to discuss the concept of the European proposal, but she emphasised that “we cannot give one thing.” She also denied claims that Vucic is hiding what is negotiating about.

“[W]e never hid anything from our citizens and our people. Vucic's policy is to speak completely openly and transparently with our people, to say what the situation is and what is on the table,” Brnabic told TV Pink.

Brnabic said that Serbia faces the most difficult times since WWII, adding that the pressures are getting harder and harder.

After the meeting with Kurti, Lajcak stated that the EU-US team “expected greater understanding” from the Kosovan prime minister for the French-German proposal on the normalisation of relations between Serbia and Kosovo, but he did not elaborate.

The EU and US representatives are intensifying their efforts to help find a solution to the Serbia-Kosovo dispute ahead of the extraordinary elections in four Serbian municipalities in northern Kosovo in April, after the main party the Serb List abandoned state institutions last autumn. The spike in tensions was triggered by new rules on car number plates introduced by Kosovo’s authorities.

M&A in Emerging Europe fell by 20% to €32.93bn in 2022
Ukrainian MP urges Kyiv to recognise Kosovo
Serbian president says Belgrade must accept Kosovo plan if it wants to join EU