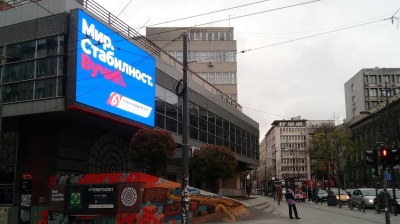 Polls closed at 8pm local time in Serbia’s triple election day on April 3, when Serbians voted in presidential and parliamentary elections, as well as local elections in Belgrade, Bor and some other municipalities.

Incumbent President Aleksandar Vucic and his ruling Serbian Progressive Party (SNS) are widely expected to win both the presidential and general elections. However, an unexpectedly high turnout on election day means the size of support for the ruling party vis a vis the opposition is hard to predict.

Exit polls are expected later in the evening of April 3, and preliminary results on April 4.

Pre-election polls indicate another victory is in the offing for the SNS. While there has been an uptick in support for opposition groups that indicates opposition MPs will at least return to the parliament, the opposition is not seen as having a chance of ousting the SNS and its partners at national level.

A report from the NGO Research, Transparency and Accountability’s (CRTA’s) observation mission published while voting was underway on April 3 said that the first half of the day was “marked by tensions and verbal attacks, while cases of physical violence were recorded in front of some polling stations as well”.

The Movement of Free Citizens in Serbia (PSG) announced on April 3 that its leader Pavle Grbovic was attacked near a polling station during the morning.

Later in the day, the Do not let Belgrade drown (NDMBGD) opposition movement said that one of its observers, Djordje Trajkovic, had also been attacked at a polling station in Belgrade’s Zemun district after filming SNS activists going door to door urging people to vote, a party statement said. Trajkovic claimed one of the assailants took his phone and deleted the recoding.

Meanwhile, Bratislav Jukovic, an MP from the SNS, said he was hit in the face at a polling station in Cacaak when he was trying to vote, as reported by Danas.

CRTA said it has submitted five complaints to the police, two concerning “carousel voting” in Kula and Surcin, and three concerning vote buying identified in Majdanpek, Zitoradja and Cukarica.

Polling stations in Kursumlija, Tutin, Bujanovac and Raska serving voters from nearly Kosovo, who were not allowed to vote within Kosovo, were overwhelmed by large numbers of voters, who arrived by bus during the day.

Long queues were also reported at other polling stations in the early evening.

The closest rival of the SNS in the race for the parliament is the coalition of opposition parties United Serbia, which includes Dragan Djilas’s Party of Freedom and Justice (SSP) and Vuk Jeremic’s People’s Party.

In the presidential election, United Serbia’s candidate Zdravko Ponos is predicted to be second placed after Vucic, but the incumbent is still likely to win a first round victory.

Amid heightened international tension following the Russian invasion of Ukraine, Vucic is believed to have benefited from a pre-election boost as the stability candidate. This has been hammered home to voters through the election billboards all around Belgrade and elsewhere with the message: “Peace. Stability. Vucic.”

Vucic has faced strong pressure from EU leaders to bring Serbia – an EU candidate country – into line with EU policy on Russia and impose sanctions. So far, while condemning the invasion, Serbia has refused to sanction its old ally. This stance appears to chime with the preferences of many people in Serbia, where memories of the 1999 Nato bombings are still strong.

This may be the reason behind the high turnout; the Central Elections Commission (RIK) reported that 41.56% of the electorate had voted by 4 pm local time. This is higher than in other recent elections.

The promise of stability is especially appealing to older voters, the majority of whom are anticipated to back the president and his party. However, as bne IntelliNews reported, there is a generational divide when it comes to voting intentions, with many first time voters and other young people staunchly opposed to Vucic’s regime.

"Although opposition parties have gained momentum in the lead-up to Serbia’s snap parliamentary elections, we still expect President Aleksandar Vucic’s Serbian Progressive Party (SNS) to emerge victorious … We also expect Vucic to be re-elected as the country’s president, remaining the de facto leader of the government,” commented Capucine May, research associate, Europe, at Verisk Maplecroft, in a research note shared with bne IntelliNews.

Teneo forecast in an analyst note that the SNS will retain its “firm grip” on power. “Overall, there is little chance of the SNS being unseated from power. The ruling party enjoys overwhelming media and financial dominance, while its grip over public sector employment enables it to coerce many voters into supporting it,” Teneo analysts said.

According to Teneo, the greatest potential for an upset is in the Belgrade City Assembly elections, given the relative positions of the SNS and the opposition in the capital, and the large number of undecided voters. “In recent years, multiple capitals across Central and Eastern Europe – including Budapest, Prague, Warsaw, Zagreb – have elected liberal mayors not representing the ruling parties at the national level. The unseating of the SNS-SPS coalition in Belgrade could boost the opposition and provide a platform to build up their support base in the future,” Teneo analysts said.

The months before the current elections saw mass environmental protests in the autumn and into the winter. The trigger was the planned Jadar lithium mine to be built by international mining giant Rio Tinto near Loznica in Serbia. However, the protests also spanned other environmental issues and became a focal point for anti-government sentiment.

The Ne Damo Jadar (Don’t Give Jadar) association, which mobilised Serbian citizens against the mine, posted on Facebook on April 3: “Attempts to steal votes have already begun. The streets will not be left empty, no one is blind – we see how many of us there are, there is no silence on theft! The streets will confirm the turnout!”

Several recent elections in Serbia have been followed by protests, some of them violent, as opposition supporters take to the streets to voice their frustration at being unable to oust the SNS via the ballot box.