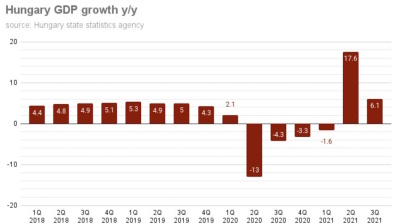 Hungary’s Q3 GDP grew 0.7% on a quarterly basis and by 6.1% in annual terms, decelerating from 2.7% and 17.8% in Q2 respectively, statistics office KSH reported, confirming the preliminary data in a second reading on December 1. Both figures were well below estimates. Detailed data revealed weaknesses in the growth structure, which pose risks for the year ahead according to analysts.

The loss of momentum in Q3 was clearly caused by the downturn in the manufacturing sectors. The output of industry (-2.7% q/q), agriculture (-4.8%) and construction (-0.3%)  lagged behind their performance in the previous quarter. While industry has been the fastest recovering sector from the crisis, its value-added is now back below pre-crisis levels. Hungary’s export-oriented automotive and electronics sectors were affected by the supply chain problems leading to reduced operations.

On the production side, the service sector became the engine of growth, spurred on by pent-up demand after the pandemic and helped by the early lifting of restrictions in Hungary. The value-added of services increased by 2.2% on a quarterly basis, much better than the previous three-month period.

On an annual basis, services added 3.8pp to third-quarter headline growth, the construction sector 1.0 percentage points and industry half a percentage point. Output of industry – likely hit by supply-chain interruptions – rose just 2.5% during the period, while the output of services climbed 6.8% and construction output increased 20.1%.

Within services, output of the commercial accommodations and catering segment rose 21.6%. On the expenditure side, final consumption contributed 3.3pp to growth, while gross capital formation added 6.0pp.

On the expenditure side, household consumption increased by 0.7% and public consumption rose by 2.6%. Gross fixed capital formation grew 1.3%.

After the preliminary reading, Takarekbank lowered its 2021 growth projections from 8% to 7% and next year’s outlook from 7% to 6.4. The finance ministry also cut its target from 7-7.5% to 6.8%, citing the fast spread of the Delta variant, the energy crisis and supply issues in the industry.

Downside risks to 2022 growth abound. The dampening effect of monetary policy tightening, the prolongation of supply shocks and the emergence of the new variant also pose serious risks, according to analysts. The service sector, which has been the driver of growth, would suffer a blow if any containment measures against COVID-19 are introduced. On the upside, a major fiscal stimulus is likely to give support to domestic consumption. ING Bank maintained its 5% GDP growth forecast for 2022 but said this appears an upbeat forecast as economic output could be much worse if downside risks materialise.