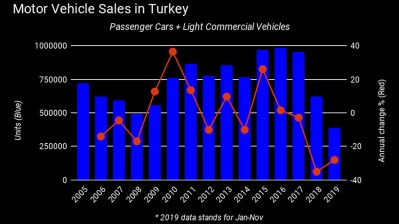 Auto sales, which enjoyed 82% y/y and 128% y/y increases in September and October, edged down 0.05% on an annual basis to 58,176 units in November, data from the Automotive Distributors’ Association (ODD) shows.

Urged on by government officials looking for a quick and fast rebound from Turkey's recession-tainted year, state-owned lenders have been offering cheaper money to consumers to revive domestic demand. The November auto sales data imply that consumers could be losing their appetite for taking on new debt.

The poor sales data in November signalled that domestic consumer demand may be weakening again.

The latest GDP figures released on December 2 showed that household consumption rose 1.5% y/y in the third quarter after dropping 7.7%, 4.9% and 1% in the previous three quarters, respectively.

Romania’s inflation up in April on higher fuel and electricity prices
2 days ago
Romania’s net wage hits record €726 in March
2 days ago
Slovenia reports hike in demand for new workers in manufacturing and retail sectors
3 days ago
Inflation in Belarus at 4.6% in April
3 days ago
Polish gross wages pick up growth to 6.6% y/y in Q1
3 days ago