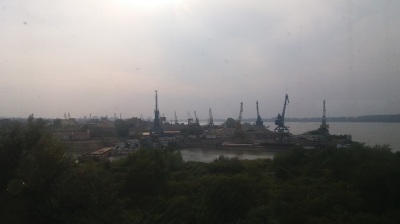 The waters in the Danube — the longest river in Europe after Russia’s Volga — have fallen to critically low levels, affecting both shipping and irrigation in countries along its route.

The situation is particularly acute in the lower reaches of the Danube, where it marks the Bulgarian-Romanian border, before flowing north into Romania where it divides into the second largest river delta in Europe and flows into the Black Sea.

Water levels in some parts of the Danube have dropped so far they reveal relicts of the past.

Near the Iron Gates II hydropower plant, the remains of ships sunk in the Second World War can now be seen. In Romania’s Calafat region, usually submerged sand islands are now above the surface, and more have appeared near Serbia’s Novi Sad, with reports of some boats running aground on them.

In Bulgaria, off-roaders have been taking jeeps and motorbikes to parts of the river bed near Liuljak Island where the waters have retreated, turning the island into a peninsula.

Romania is both a major EU grain producer in its own right, and a channel to export Ukrainian grain to international markets. It is also a producer of sunflowers, another in-demand crop as supplies from Ukraine have been constrained by the war.

On July 24, Romanian Agriculture Minister Petre Daea announced in a Facebook post: “Unfortunately, in Teleorman, Olt and Dolj [counties] we no longer have water for irrigation!”

The same day, the National Institute of Hydrology and Water Management (INHGA) said, as quoted by Agerpres, that the flow in the river was only one third of the usual level at this time of year.

Daea said it was no longer possible to draw water from the river for irrigation at a number of pumping stations along the river. “The waters have moved away from the shore, even with all the measures taken to dredge the supply channels, we no longer have water at the intakes,” he wrote.

On a more positive note, Daea added that investments into the rehabilitation of the irrigation system in Romania are being accelerated: “We are turning the interruption of water pumping into the system into a good opportunity to carry out work in the pumping stations and to waterproof the supply and distribution channels.”

After the Russian blockade on Ukraine’s Black Sea ports, the country’s neighbours such as Romania scrambled to offer their own ports to export grain. Grain has been transported from the Ukrainian Danube ports of Reni and Izmail into Romania.

However, this traffic is threatened by the extremely low waters in the Danube, after weeks during which the river flow was impacted by high temperatures and low precipitation in countries along its route.

The low water levels also affect regular shipping — both cargo and cruisers. Reports from along the river say that shipping in the Bulgarian section of the Daube has almost stopped, while vessels are waiting at ports and transit stops.

Media in Serbia also report that the low water level makes navigation difficult. The authorities say there has not been a suspension of river traffic, but there have been problems along sections of the river, Deputy Minister for Water Transport Veljko Kovacevic told RTS. Ships heading to Bulgaria face the most difficult sailing conditions.

“[I]t is a serious problem that affects us, because part of the coal that needs to be transported for the needs of the Nikola Tesla thermal power plant comes from Bulgaria, through the port of Ruse," Kovacevic told RTS.

The Danube is not the only river affected by this summer's droughts and heatwaves. The Rhine, a critically important European waterway, was reported in early August to be just a few days away from a suspension of commercial traffic.

The Danube is also an important transport route for the countries that lie along its 2,857 km length, several of them landlocked. It enables them to ship goods to and from Central and Southeast Europe, as well as downstream to the Black Sea. The Rhine-Main-Danube canal also creates a trans-European river corridor from the North Sea via the Rhine and Danube to the Black Sea.

While there have long been complaints that technical bottlenecks mean the river’s full potential as a transit route is not being utilised, several countries have announced new infrastructure investments in recent years.

Serbia is preparing to invest almost €0.5bn into the Port of Belgrade, which is set to become a major inland port, Minister of Construction, Transport and Infrastructure Tomislav Momirovic said in June. On a smaller scale, the previous month, Dubai-based logistics company DP World has started the construction of a new container terminal, vertical quay and silo in the Port of Novi Sad. In Romania, Galati announced a €80mn investment project in 2020, to develop a multimodal (or combined) transport platform.

NEMETHY: Is the world heading towards a “polycrisis”?
Bonds of Romanian online retailer Elefant plunge on weak H1 results
Romanian president tries to save flagship education strategy after plagiarism scandal

bneGREEN: Fit for 55 – not fit for purpose
5 days ago
bneGREEN: Slovenia’s Sigma Energy deploys device to convert sea waves into electricity
17 days ago
bneGreen: Southeast Europe’s first eco-mosque opens in Croatia
24 days ago
bneGREEN: Europe pays what it takes to bring in LNG but still cannot get enough
26 days ago
bneGREEN: Baltic states – except Russia – agree to aim for seven-fold increase in offshore wind
1 month ago