Shootings at latest protest in Skopje as unrest intensifies 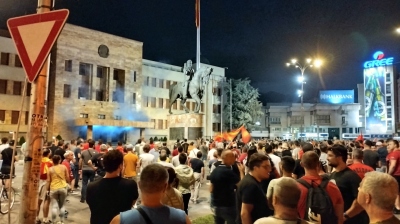 Violence and incidents marked the fifth day of protests in Skopje.
By Valentina Dimitrievska in Skopje July 7, 2022

The protests in North Macedonia’s capital Skopje continued for the fifth consecutive day on July 6 against the compromise solution for lifting the Bulgarian veto on the country’s EU accession talks.

Violence and incidents marked the fifth day of protests, organised by the opposition conservative VMRO-DPMNE party. Two police officers were injured and there were reports of shootings. Leader of VMRO-DPMNE, Hristijan Mickoski, claimed that he was a target of gunfire during the protest.

People in North Macedonia are dissatisfied with the French proposal, which is intended to unblock the stalled EU accession process, claiming that it is harmful for the Macedonian national interests.

While protesters were passing by the Skender Bey square, a group of ethnic Albanians started to provoke them and the two groups threw stones and other objects at each other. The incident lasted for 10 minutes, until special police units came to prevent a major incident.

“This is the man who was supposed to kill me tonight. I demand that he be immediately detained by [Interior Ministry Oliver] Spasovski and the Ministry of the Interior!” Mickoski said on Facebook, posting a photo of several people, one of them holding a gun.

“Several shots were fired, which luckily did not end up in the crowd,” Mickoski said.

At 10 pm Mickoski hold an extraordinary news conference to say that he had information that he was supposed to be assassinated.

“I want to remind that such a scenario was announced by the government, the Foreign Minister Bujar Osmani, who announced that there will be inter-ethnic tensions if the proposal that foresees the assimilation and Bulgarisation of [North] Macedonia is not accepted,” opposition leader said.

The protest ended in front of the parliament.

In the meantime, the police said that they detained a person with initials E.J. (40) of Skopje who fired a gun in the air during the protests. He was not part of people who were protesting.

A day earlier, 47 police officers were injured, 11 of them seriously, while two officers with serious injuries were hospitalised. 11 protestors were detained, two of whom were minors.

Mickoski announced on July 6 that the protests will continue.

“We are continuing tomorrow at 7 pm in front of the government,” Mickoski said.

EU officials are urging North Macedonia to accept the proposal and start the long-awaited EU-accession talks, claiming that the Macedonian national identity and the language are protected with the French proposal.

First official results from Bosnian elections put nationalists ahead after exit polls predicted losses
10 hours ago
Georgian MPs want to rid the country of oligarchs, but not all of them
10 hours ago
Hungary agrees on deferred payments with Gazprom for winter gas deliveries
10 hours ago
US sanctions Russia’s CBR head Nabiullina and other officials
10 hours ago
Russia prepares for new attacks against Ukraine from Belarusian territory
11 hours ago