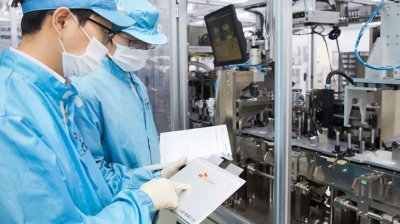 Electric battery maker SK Innovation is planning to expand the capacity of its second factory in Hungary to have a capacity equivalent to 16 Gwh instead of 10 Gwh to meet soaring demands from European carmakers, Reuters reported.

The South Korean company announced plans to build its first battery factory in Hungary in 2017. The annual production of the plant is 7.5 Gwh, equal to providing batteries for 200-250,000 zero-emission cars. The company unveiled plans in February 2019 to build a second plant in the northern Hungarian town near the Slovakian border from HUF239bn (€720mn) investment. The new factory is to be completed in 2021 and will begin large-scale deliveries of cells to European car manufacturers from 2022 onwards.

According to SK Innovation chairman-CEO Kim Jun, the company is planning to boost its capacity there to 16 Gwh, but no further details were released.

Kim Jun also said the firm is in talks with Volkswagen to form a joint venture to manufacture batteries for electric cars. SK Innovation is also weighing options to build the additional 6 Gwh capacity in a European country other than Hungary, according to Reuters.

Other Asian battery makers have picked Hungary as their production site.

Besides SK Innovation two of the largest manufacturers, Samsung and GS Yuasa have a base in Hungary. Samsung SDI is expanding its factory north of Budapest from a HUF390bn investment.

Currently the European Commission is reviewing the eligibility of the €108mn state subsidy for the project.

The emergence of Asian manufacturers in the region is based on strong demand for batteries for electric cars, as European car manufacturers are turning to electric models Before carmakers mostly purchased batteries from China and South Korea, but the proximity to markets makes puts Hungary, which is has made huge strives to become the regional leader in electromobility at an advantage.

Last year South Korea was the largest investor in Hungary. According to data from the Ministry of Foreign Affairs and Trade, the combined investment value of the projects reached a record HUF1.7 trillion in 2019, of which South Korean companies accounted for 48%.

The company has financed its sharp expansion over the last few years by aggressive borrowing. It is now eyeing the mobile telecommunication operations of Deutsche Telekom in Romania.