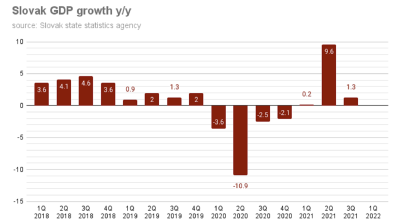 Slovakia's economy recorded an annual growth of 1.3% in 3Q21, driven mainly by domestic consumption, slowing down due to a drop in foreign demand, according to data by the Slovak Statistics Office. Quarter-on-quarter growth of GDP reached 0.4%.

According to bank analysts, the performance of the Slovak economy recorded for 3Q21 was a disappointment. "The summer GDP figures in Slovakia were rather disappointing. The country posted one of the slowest rates of GDP growth in the EU," said UniCredit Bank analyst Lubomir Korsnak for the Slovak News Agency.

In 3Q21, the performance of the Slovak economy approached the pre-pandemic level, however, it still lacked 0.7% to reach 2019 figures. Slovakia´s household consumption grew by 2.5% year-on-year at the end of September which, as pointed out by Slovenska Sporitelna analyst Matej Hornak, was significantly lower than the one indicated by the monthly data.

Exports of goods and services dropped by 3% y/y, while imports maintained moderate growth of 3.5%, resulting in a deficit of €499mn.

Following the developments in the macroeconomic situation at the end of the year, Slovenska Sporitelna decreased its GDP growth estimate for 2021 from 4.2% to 3%.

Slovak parliament likely to approve defence agreement with the US