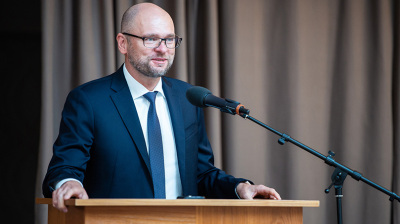 SaS party leader Richard Sulik: “If we didn’t do anything now, then in the regular elections, in 15 months, it will be Robert Fico who returns." / bne IntelliNews
By Albin Sybera December 2, 2022

Slovakia faces a bruising vote of no-confidence in its embattled minority government next week that could lead to early elections or a caretaker cabinet. The vote comes as public support for the government has collapsed amid political divisions and defections and the perceived failure of the cabinet to get a grip on the worsening cost of living crisis.

The neoliberal SaS party, which quit Slovak Prime Minister Eduard Heger’s ruling coalition in September, said it has collected enough signatures to call a vote of no-confidence. SaS party leader and until recently the country’s industry minister Richard Sulik said legislators aligned with former premier Peter Pellegrini, who heads the opposition Hlas-SD party, have helped give it the 30 signatures required.

Since its election in February 2020, the government has been hamstrung by the personal antagonism between Sulik and OLaNO party leader and Finance Minister Igor Matovic. Sulik has continually criticised Matovic for what he calls his chaotic management at the financial ministry and his controversial public statements on Facebook.

The embattled minority coalition is currently backed by only the 47 deputies of the conservative OLaNO party together with the 20 MPs of the radical rightwing Smer Rodina party, plus around six independents and members of the tiny Za lyudy (For the People) party, giving it only 73 MPs in the 150-member parliament. However, with the frequent migration of legislators between the parties, it is difficult to predict the actual balance of power, leaving the government highly vulnerable to votes of no-confidence. A vote of no-confidence in Matovic, also initiated by the SaS, failed by only three votes in October.

The collapse of the government could lead to early elections or a technocrat cabinet appointed by President Zuzana Caputova that would rule until the next scheduled election in February 2024.

A new election could potentially lead to to the return of former populist premier Robert Fico, the country's dominant politcal figure of the past 15 years, who was forced to resign in 2018 following the pressure from protests sparked by the killing of investigative journalist Jan Kuciak and his fiancé.

Pellegrini said that the only alternative to the current cabinet is early elections. “No caretaker cabinet, no new majority in the parliament – only people can decide who they will give mandate to lead Slovakia out of the crisis in these difficult times”, Pellegrini said.

Sulik also appeared to back a snap poll, to head off a potential return of Fico. “If we didn’t do anything now, then in the regular elections, in 15 months, it will be Robert Fico  who returns by possibly winning these elections because his greatest supporter is Igor Matovic”, Sulik told local media.

November opinion polls show that  Pellegrini's social democrat Hlas-SD would obtain 18.6% and Fico’s populist Smer-SD sits at 14.2%. SaS would obtain 6.5%, while Smer rodina and OLaNO hover around the 5% threshold to re-enter the National Assembly. Non-parliamentary liberal Progressive Slovakia would obtain 9.8%.

Heger criticised Sulik’s coordination with Hlas-SD, which splintered off Fico’s party after the February 2020 general elections.   “If he [Sulik] will want to tell anyone ahead of the elections that he is not considering cooperation with Hlas-SD then no one will believe him now,” Heger was quoted as saying by Radio Slovakia.

The parliamentary session of the vote of confidence could be held next Thursday on December 8, parliamentary spokesperson and Sme rodina chairman Boris Kollar expects. “Until now there was a chaos in the government, after SaS left it there is chaos here [at the parliament]," he stated.

The political chaos may prevent the passing of the 2023 state budget next week, which could force the administration to continue with the same budget totals as this year.

The continuous political infighting has also made it difficult for Heger’s cabinet to pass effective measures to combat the ongoing energy crisis to which Slovakia is particularly exposed. According to the European Central Bank, nearly 6% of Slovaks have no financial reserves, making them the most vulnerable to the high inflation, along with Cypriots and Italians.

In her recent state of the republic address, President Caputova warned that Slovak society has “reached a critical point”,  highlighting that 660,000 Slovaks are threatened by poverty.  The government's health system was also recently threatened with collapse from a strike by exasperated healthcare staff.

Fico – who has recently been freed of charges along with his ex-minister of interior Robert Kalinak of being part of an organised crime scheme while in office – has been eying a return to the government for some time. His Smer-SD initiated a petition which will lead to a referendum being held in January on shortening the cabinet term. He has also  publicly floated the idea of working with the new far-right Republika party.

However, given the deep political divisions, it is difficult to see how any group of parties would be able to form a stable future government. Even a coalition designed mainly to keep Fico from returning to power would be difficult to form, because many parties continue to refuse (at least publicly) to contemplate working with each other.

RBI's 2022 profits soar to €3.6bn, with Russian operations representing more than half
Russian gas pipe flow dips to record low in January
Only Hungary and Russia heading for recession in 2023 as Emerging Europe shows its resilience