Slovak unemployment down below 7% in October 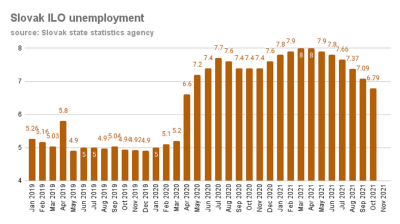 The Slovak unemployment rate dropped to 6.79% year-on-year in October, down by 0.3 percentage points (pp) month-on-month from 7.09% recorded in September, falling for the seventh month in a row, according to data provided by the Labour Office.

"The decreasing unemployment rate is proof that thanks to the measures and projects of the labour ministry we are succeeding in making the labour market recover. The lowest unemployment rate in the last 18 months shows that we have been able to protect existing jobs during the pandemic as well as create new ones thanks to active labour market measures," said Minister of Labour, Social Affairs and Family Milan Krajniak.

"Despite the fact that we're in an autumn wave of the pandemic, the unemployment figures are quite good," he added. However, a drop in unemployment is soon likely to stop or slow down,  analysts expect.

According to UniCredit Bank analyst Lubomir Korsnak, the labour market might temporarily "freeze" or see a gradual slowdown because of the current pandemic wave.

More functional government aid ”contributed to the maintenance of a downward trend in the unemployment rate. A slightly higher number of newly unemployed was added to labour offices' registers in recent months only from the public sector," Korsnak was quoted by the agency as saying.

According to data released by Slovakia's central bank (NBS), the October unemployment rate reached 7.7%. The number of job seekers registered with labour offices dropped by around 4,000 people.

“The outflow of unemployed from labour offices is higher than the inflow of registered job seekers. However, this is a downward trend and the number of people newly registered at labour offices or those leaving the registers (for employment or elsewhere), is going down," stated NBS analysts.

Russian inflation falls again to 14.9% in August, fears of a deflationary spiral grow
5 hours ago
FDI in Bosnia rose by 35% y/y in 2021
8 hours ago
Latvian unemployment rate at 6.6% in 2Q
1 day ago
Polish economy in much sharper downturn than expected, Q2 GDP data show
1 day ago
Russia’s EconMin seen as overly optimistic with another GDP upgrade
1 day ago