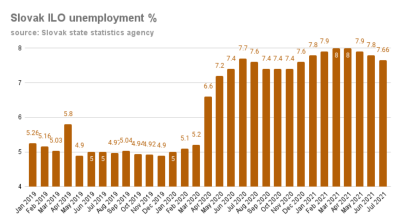 The Slovak unemployment rate reached 7.66% in July, down from 7.92% month-on-month, for the fourth consecutive month, according to monthly data released by the Labour Office on August 20.

"We expect the labour market to be stable in the future, in the next few months. We don't expect the decline in unemployment to be rapid because the effects of the pandemic are still apparent, but based on this, we can see that people who may lose their jobs in the post-pandemic situation will have an opportunity to find a new one," said Labour, Social Affairs and the Family Minister Milan Krajniak, quoted by the Slovak News Agency.

The number of available jobs has gone up to 73,575 in July. In year-on-year terms the number of people in material need dropped by about 5,000.

The targeted state aid to employers and employees due to COVID-19 amounted to more than €2bn, “which has helped precisely to ensure that the labour market is stabilised, offers enough jobs and, just as importantly, that the number of people who are dependent on material hardship benefits is decreasing," said the ministry, quoted by the Labour Office, adding the number of material need beneficiaries has been steadily declining since last summer, even during the winter/spring wave of the pandemic.

Slovak inflation at its highest level since October 2012
GLOBSEC: No debt ratio is safe for small EU countries
Slovakia's GDP grew by more than 9% in 2Q21, statistics office confirmed

Inflation accelerated driven by food prices, in line with an increase in prices seen across the emerging Europe region.