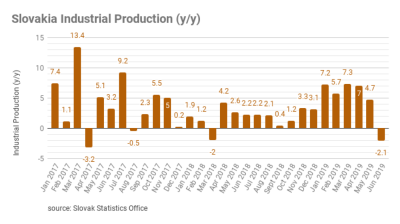 Slovakia’s industrial production contracted by 2.1% year-on-year in June, a sharp fall from the 4.7% expansion the previous month, to its lowest level in more than two years
By bne IntelliNews August 14, 2019

Slovakia’s industrial production contracted by 2.1% year-on-year in June, a sharp fall from the 4.7% expansion the previous month, and fell to its lowest level since April 2017, Slovak Statistical Office data showed on August 9.

Overall, in 1H19 the industrial production grew by 4.9% y/y, owing to an increase of electricity, gas, steam and air-conditioning supplies by 10.8%, industrial output by 4.2% and mining by 1.2%.

However in June, the industrial production seasonally adjusted recorded a drop of 1.4% m/m, mainly caused by a decrease in manufacturing by 4.1%, while electricity, gas, steam and air-conditioning supply as well as mining and quarrying increased by 15.1% and 10.9%, respectively.

According to UniCredit analyst Lubomir Korsnak, as quoted by Aktuality.sk, Slovakia’s industry performance in June was disappointing and its decrease surprisingly caused by the automotive industry. "If we exclude drops during Easter and holidays, which are usually affected by the base effect, it is only the second y/y drop of industry since 2013. The first one was a minor drop by 0.1% in December 2017,” said Korsnak, pointing out that transportation equipment production went down by 7.6% y/y and cut 2.16 percentage points of the industrial growth in total.

Slovenska Sporitelna Chief Economist Maria Valachyova believes that car manufacturing, which declined by 8% y/y, had a negative imprint on the industrial production in June. “The slowdown in the Eurozone and Germany is visible in our figures. For the upcoming months, industrial production statistics tend to be quite volatile over the summer,” she added.

“Slovakia’s industry prospect for the upcoming months is not exactly rosy. European sentiment indicators have been mostly falling over the past months. Thus, a lower external demand could slow down the Slovakia’s industry performance as well in the months to come,” added Korsnak.