Slovakia ́s retail trade revenues down to 2.7% growth in May y/y, the biggest drop since 2012 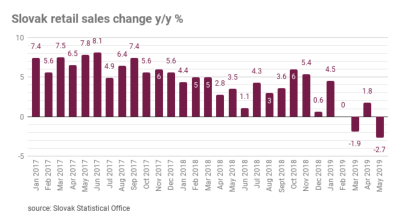 Slovakia ́s revenues from retail trade (excluding car sales) tanked by 2.7 % in May year-on-year, following a 1.8% gain the previous month, according to data from the Slovak Statistical Office released on July 4 -- the biggest month-on-month fall since 2012.

Meanwhile, sales advanced faster for cultural and recreational goods, which grew by 22.2% in the month, up from 17.6% growth in April and for those in stalls and markets up by 16.3% from 13.1% in April. Month-on-month retail sales dropped by 1.9% after a 0.4% increase in April.

The sale of cars and vehicles also expanded in May.

Despite a growth of turnover in sales of motor vehicles, there are warning lights flashing for Slovakia ́s auto industry, according to Reuters. Volkswagen's Bratislava factory decided to enter a round of job cuts that has sent shockwaves through the country lately. Competition from lower-cost southeastern European markets, a shift to electric vehicles and global trade tensions are seen as the main reasons.

"To use a car metaphor, we see a warning light, we don't need to take the car for a general repair yet. …We have 300,000 people working in the car sector (directly and indirectly). Should anything happen to them it would be serious," said the Slovak Economy Minister Peter Ziga for Reuters.

On the other hand, Slovakia's Jaguar Land Rover plant is entering the final stage of its massive recruitment campaign, hiring up to 2,200 employees, to be able to launch the second shift, to result in the annual production of 150,000 cars, reported by daily Sme.sk.