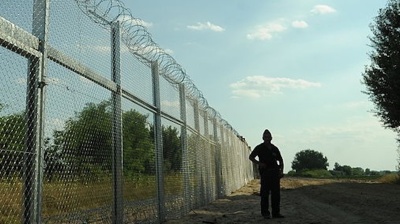 The fence on Hungary's border with Serbia. Italy has proposed a similar fence on its border with Slovenia as migrants find new routes across the Balkans.
By bne IntelliNews July 7, 2019

Slovenian officials are opposing the idea of building a protective fence on the Slovenian-Italian border, suggested by Italy’s interior minister, saying it is unacceptable, media reported.

Italian Interior Minister Matteo Salvini reiterated on July 5 that if mixed border patrols between Slovenia and Italy, which began on July 1, fail to prevent the inflow of migrants, Italy would erect a physical barrier on the border with Slovenia.

The joint patrols will be in place three months and will be conducted until September 30, in line with the agreement between the two countries.

“We will make the border with Slovenia impenetrable by all available mean,” Salvini was quoted as saying by Slovenske Novice.

Slovenian Prime Minister Marjan Sarec, on the other hand, responded that the authorities are controlling the situation at the borders and that building a physical barrier with Italy is not necessary, Slovenske Novice reported on July 6.

Sarec acknowledged that illegal migrant passages are taking place, but according to available data they have not increased. He stressed that the Slovenian and Italian police are cooperating well and supported the joint patrols.

Slovenian parliamentary parties and MEPs were also critical of Italy's announcement that it might build physical barriers on the border with Slovenia.

“Current developments in relations with Italy are a total disaster and a proof that our government is impotent regarding security issues,” an MP from the Slovenian Democratic Party (SDS) Branko Grims was cited as saying.

Slovenia’s BSH Hisni Aparati, which was one of the first large manufacturers in the country to halt production over the coronavirus (COVID-19) epidemic, is now among the first to relaunch ... more

Slovenia’s economy could contract by between 6.2% and 16.1% in 2020 due to the huge consequences expected from the outbreak of coronavirus (COVID-19), the central bank said on March 31. The Bank ... more