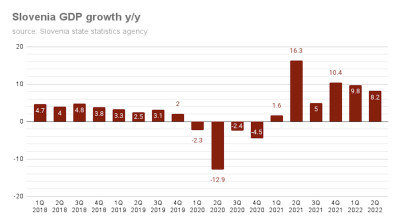 The Slovenian economy expanded by a real 8.2% in the second quarter of 2022, following a 9.8% growth in the previous quarter (chart), according to non-seasonally adjusted data released by the statistics office on August 16.

Domestic and foreign demand both had positive impacts on the GDP growth in the second quarter. Household expenditure contributed most to the domestic consumption, while foreign demand was strongly affected by trade in services.

According to seasonally adjusted data, the annual GDP growth was 8.3% while the quarterly growth was 0.9%.

In the second quarter of 2022, domestic consumption increased by 8% while household consumption expenditure grew by 10.6% and contributed the most. Gross fixed capital formation increased by 6.4%. The changes of inventories had a positive impact on GDP growth f 1.1 percentage point.

In the second quarter, the GDP growth was the highest in the other service activities of 24.4% followed by financial and insurance activities (+23.8%), as well as trade, transport and storage, accommodations and food service sector (+20.8%).

Manufacturing sector increased by 2.7% y/y in the second quarter while the growth in the construction was 7.7%.

Czechs try to transform EU's relationship with Israel
bneGREEN: Fit for 55 – not fit for purpose
More pain stored up for Emerging Europe in 2023