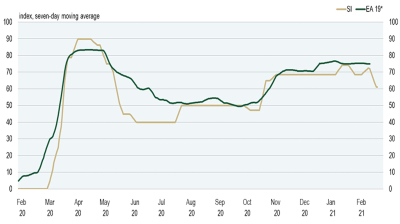 The Slovenian economy contracted in the last quarter of 2020, amid the second wave of the coronavirus epidemic, but the slowdown was significantly lower than during the first wave, despite worse epidemiological data, the central bank said.

According to statistics office data, the Slovenian economy declined in real terms by an annual 4.5% in the fourth quarter of 2020 and by 5.5% in the entire 2020.

“The situation remains slightly better than in the euro area overall, which is a starting position for the recovery after the epidemic eases,” the central bank said in the statement on February 26.

"The year-on-year GDP decline stood at 5% according to seasonally adjusted figures, which is 8 percentage points less than in the second quarter. GDP declined by 6.1%, according to seasonally adjusted data in 2020, slightly better than expectations, and also better than overall performance in the euro area, where it declined by 6.8%," the central bank said.

The Bank of Slovenia also concluded that the labour market did not deteriorate significantly.

“For now the anti-crisis measures have helped to preserve the majority of economic potential, which will provide the basis for the recovery after the epidemic eases, but this caused a huge impact on the fiscal position,” it said.