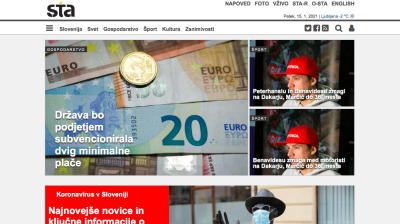 By Valentina Dimitrievska in Skopje January 14, 2021

STA reported in December that its operations were endangered after the conservative government of PM Janez Jansa, who accused STA of unfair reporting, suspended its funding for the agency.

The funding was cut in December when the government claimed that STA's management failed to provide the necessary data on the agency's financial operations.

The government provides around €2mn annually to finance STA's operations. In return, the agency is obliged to provide regular reports on how the public funds are spent.

On January 14, the government announced it has received a positive answer from the European Commission on the funding, after it referred the issue to Brussels in fears that the funding may breach the EU rules on state funding.

"The Government Communication Office (UKOM) received a message from European Commissioner Margrethe Vestager, indicating the possibility of a positive decision regarding the transfer of state aid to STA," the government said in the statement.

"On the basis of the communication, a payment under the provisions of the seventh anti-coronavirus package was provisionally granted pending a final decision by the European Commission," it added.

However, Slovenian experts believe that the funding for STA under the most recent coronavirus stimulus package does not have to be assessed by the European Commission because the funding does not constitute state aid.

STA warned in December that its operations were endangered by the decision to suspending funding as the government is its main source of financing.

“This undermines the functioning of the agency, as the financial compensation from the public funds represents the key source of financing of the STA,” STA said in December.

“[S]hould this attitude by UKOM towards the STA continue, this will jeopardise not only the stability of operation and the livelihood of the staff but also the future of the agency, which like the Slovenian state, will celebrate its 30th anniversary next year,” it said.

Meanwhile, STA could still see its funding cut in future as the Slovenian government is planning controversial media reforms, which include major financial cuts for both STA and state-run broadcaster RTV Slovenija, and more government control over the media, which drew strong criticism from local media.

The International Press Institute (IPI) said in September that a swift downturn in press and media freedom has been observed in Slovenia since the new government under Jansa came to power in March 2020.

"In addition to the introduction of legislation aimed at defunding the public broadcaster, Jansa has also attempted to personally increase his party’s pro-government media system, much of which are funded by Hungarian media linked to Viktor Orban, who has dismantled media freedom and pluralism in Hungary over the past 10 years," said the report.

This has added to the tensions between Jansa’s right-wing Slovenian Democratic Party (SDS) and its centre-right junior coalition partners.

Centre-left opposition parties plan to file a no-confidence motion against the government on January 15. They have been joined by the SDS’ former coalition partner the Pensioners' Party (DeSUS), which quit the government in December. Both the opposition and members of the coalition led by Jansa are understood to be unhappy with what has been dubbed the “Orbanisation” of Slovenia since he returned as prime minister. Jansa is a close ally of Hungary’s illiberal Prime Minister Viktor Orban.