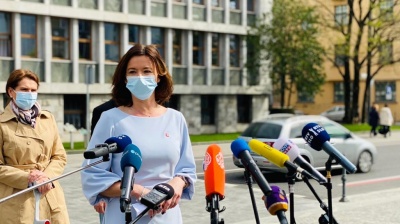 This is a fresh attempt by the opposition to remove Jansa from power after the prime minister survived a no-confidence motion filed by five opposition parties led by the Pensioners' Party (DeSUS) in February.

Jansa’s government was accused of violating several articles of the constitution and laws, regarding healthcare, the media, the prosecution and human and constitutional rights.

The motion was filed by the List of Marjan Sarec (LMS), Social Democrats (SD), the Left and the Party of Alenka Bratusek (SAB).

"The centre-left opposition is making a constitutional accusation for the first time in the country's history because it is the only way for the PM to stop playing with the constitutional order," SD head Tanja Fajon said in a tweet.

She added that in the meantime, Jansa's government should stop "playing" with the epidemic and people's lives.

“I am sorry that we have come to a point where, as the opposition, we have to use the most serious instrument ... for our own promotion or to discredit the institution of the prime minister,” Fajon underlined.

The opposition parties accused the government of failing to order an optional 900,000 doses of Pfizer/BioNTech and Moderna vaccines in December, presuming the cheaper AstraZeneca jabs would have become available in the meantime. AstraZeneca later supplied less than planned, news agency STA reported.

The government has imposed a new lockdown, in force until April 11, to prevent spread of the British COVID-19 variant and help hospitals cope with an expected influx of patients. The lockdown includes an overnight curfew and online teaching. All events, gatherings, celebrations and weddings are temporarily prohibited as well as sports except for individual sports.

Regarding the media, the opposition parties critcised the government for suspending finances to state-run STA. That followed accusations by Jansa of unfair reporting. The prime minister called the agency, which receives a substantial part of its funding from the state, a “disgrace”.

Jansa has faced growing criticism both from within Slovenia and at European level, being accused of undermining media freedom as well as restricting freedom of expression since his rightwing government came to power in early 2020.

The government is also accused of breaking the law on the prosecution by failing to appoint five out of ten prosecutor candidates put forward in the autumn and “dragging its feet” in the appointment of the selected candidates for European delegated prosecutors.

Responding to tweets Jansa called the motion another “pathetic move” aimed at discrediting the government during the pandemic.

Previously, the prime minister accused the opposition of obstructing its efforts to fight the pandemic. “The acts of the Social Democrats, List of Marjan Sarec (LMS), Alenka Bratusek Party (SAB) and Left in this time of great distress are nothing but hostile towards the homeland, the nation and the state,” Jansa wrote in a letter to members of his conservative Slovenian Democratic Party (SDS) on March 13.

For the motion to succeed, it should be backed by at least 46 of the 90 MPs. The parliament should decide on the proposal within 60 days or else it is considered rejected. If supported, the motion is then referred to the Constitutional Court.

Back in February, the no-confidence motion was filed by Karl Erjavec’s DeSUS and supported by the List of Marjan Sarec (LMS), the Left, Social Democrats (SD) and the Party of Alenka Bratusek (SAB).

The result left Jansa, whose illiberal policies have been likened to those of his close ally Hungarian PM Viktor Orban, in a strong position to remain in power until the next term election in 2022 as well as emboldening him to continue with changes that have worried the opposition and civil society and caused DeSUS to quit the ruling coalition. However, amid Slovenia’s increasingly polarised political environment, opposition parties have launch another attempt to remove him from power.