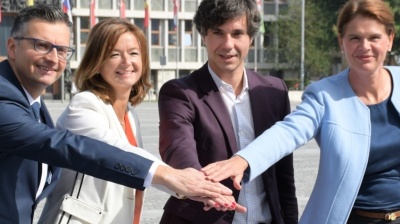 Since his return to the prime minister position in early 2020, his critics have accused Jansa of degrading Slovenia’s democracy, not respecting the rule of law and his grip on the media. He has also clashed several times with EU officials.

The proposal for post-election cooperation was put forward by the leader of the List of Marjan Sarec (LMS), former prime minister Marjan Sarec, in August.

Jansa was elected PM in early 2020, following Sarec’s resignation on January 27. Sarec aimed to trigger a snap general election, as he had been unable to implement substantial reforms at the helm of a minority government. Instead, Jansa’s SDS agreed to form a government in coalition with two other parties.

“The post-election cooperation agreement is the basis for setting up a strong, successful, efficient and development-oriented government after the elections,” LMS said in the statement, after signing the deal at Ljubljana’s main square, Trg Republike.

The four parties committed to strike a coalition agreement and form a new government following the 2022 election. The leader of the party that gets the largest number of votes will be appointed as the prime minister-designate.

If all four signatories of the deal agree, they can include other parties in the coalition.

The agreement consists of dozen of principles including a commitment to a consistent and professionally supported response to the COVID-19 pandemic.

They committed to strengthening the independence of institutions that are crucial for the transparent functioning of the state, public media, NGOs, civil society and depoliticisation of the security system.

The fight against poverty and inequality and creating jobs are included in the principles.

The parties pledged to deal with corruption, to invest in the quality and accessibility of public health and education as well as to increase investment in science and culture.

“I strongly believe that the four parties will form the future government coalition that will normalise the country, achieve the unity of the nation, clear up corruption and that protests will not be necessary anymore,” Sarec said in a tweet.

“Today is an important day, both for the opposition parties and for the whole of Slovenia,” Sarec added.

According to a recent poll commissioned by the broadcaster POP TV, most parliamentary parties have lost support. Jansa’s SDS recorded its worst results this year, while its coalition partner New Slovenia (NSi) slipped back the most.

The work of the current government was supported by 28.8% of respondents, while 63.1% opposed it, according to another poll conducted by the Mediana agency.

Among the parties, Jansa’s SDS still has the largest support of 15%, but it fell by 1.1 percentage points (pp) from the previous poll in August.

Fajon’s opposition SD was in second place on 9.6%, but down by 1.5 pp compared to August.

SD was followed by Levica, supported by 8% of the respondents, and LMS on 7%, after its support increased by 1.4 pp over the last few months.

SAB’s support also increased to 5.2%. Together, the four parties that signed the cooperation deal have the support of over 29% of the electorate.

Just 3.9% of respondents would vote for the SDS’ coalition partner NSi after its support slumped by 1.7 pp.

Jansa is a controversial figure who spent six months in prison after being convicted of receiving bribes in connection with a deal with Finnish defence company Patria, though his conviction was later overturned as the constitutional court ruled that it was based on insufficient evidence.

In 2018 he was given a three-month suspended sentence for insulting two journalists by calling them prostitutes.

Since becoming prime minister, his government has cut off funding for Slovenian Press Agency (STA) after Jansa accused it of unfair reporting. STA is supposed to receive funds for its public service activities. The European Commission has repeatedly expressed serious concerns about this issue, which overshadowed the launch of Slovenia’s EU Council presidency in July.