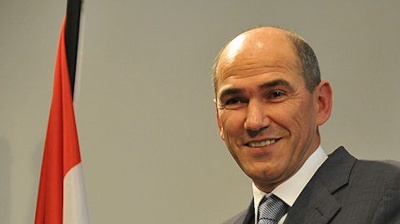 By Valentina Dimitrievska in Skopje November 19, 2020

Slovenian Prime Minister Janez Jansa sent a letter to EU leaders in which he backed the decision by Poland and Hungary to veto the EU budget over plans to tie funding to respect for the rule of law, local media reported on November 18.

On Monday, Hungary and Poland blocked the approval of the EU’s seven-year budget and the recovery fund totalling €1,810bn, as they opposed the rule of law mechanism attached to the EU funds.

"Today, some political groups in the European Parliament openly threaten to use an instrument incorrectly called the 'rule of law' to discipline individual member states by a majority vote," Jansa said in a letter, according to Delo.

"Those of us who have spent part of our lives under totalitarian regimes know that deviation from reality begins when processes or institutions are given names that mean the exact opposite of their essence," he added.

The letter from Jansa, who is political ally of Hungarian PM Viktor Orban, triggered a wave of reactions in Slovenia including from coalition partners who distanced themselves from the prime minister.

Slovenian Health Minister Tomaz Gantar pointed out that the EU was facing the greatest health and economic crisis since WWII and that unity among its member states was essential.

"The prime minister's letter to European leaders certainly does not benefit Slovenia's interests, it puts us among the problematic countries to which we have never belonged. This requires serious discussion," he tweeted.

Minister of Justice Lilijana Kozlovic announced that she was distancing herself from the letter.

"The rule of law must be respected. That is why I support any efforts and mechanisms that contribute to this,” she said.

The leader of the parliamentary group of the opposition Left party, Matej Vatovec, said that it would be most appropriate for Jansa to resign.

"As prime minister we cannot expect Jansa to resign on his own, but a no-confidence motion has to be filed," he added.

While Slovenia did not join Poland and Hungary in vetoing the budget, Jansa said that the rule of law means that disputes are decided by an independent court and not by a political majority in any other institution.

Strong hopes Georgia's political crisis is over after EU brokered agreement
4 hours ago
Bulgaria’s outgoing government under scrutiny over sudden hike in budget deficit
15 hours ago
Team Navalny pulls the trigger on the next big demonstration scheduled for April 21
19 hours ago
Samolet see EBITDA up by half despite the coronacrisis
22 hours ago
Will Belarus merge with Russia this week?
1 day ago