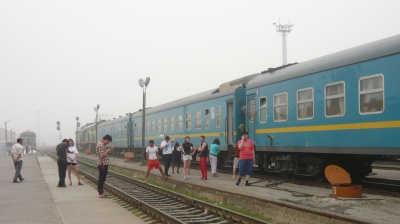 Global remittances are heading for the worst slump in recent history, with a decline of around 20% forecast this year, a new World Bank report says.

Sharp economic contractions brought on by the coronavirus (COVID-19) pandemic and lockdowns aimed at containing the spread of the virus are anticipated in many countries around the world, including in Central and Eastern Europe (CEE) and Eurasia, at least for the first half of this year. Migrant workers are particularly vulnerable to such economic crises in their host counties, points out the World Bank.

Globally, remittances to low and middle-income countries (LMICs) are projected to fall by 19.7% year on year to $445bn this year, according to the World Bank report COVID-19 Crisis through a migration lens.

The Europe and Central Asia region is forecast to face a considerably worse contraction than the global average, at -27.5% compared to 2019, with the value of remittance payments falling from $65bn in 2019 to $47bn in 2020, and only slightly recovering to an anticipated $49bn in 2021.

This contraction is almost twice as severe as the one seen in 2009, the peak of the last international economic and financial crisis, when remittances to the region fell by 14.7% y/y.

Given the ongoing crisis, this is particularly damaging for LMICs, which are set to lose out on other sources of external financing such as foreign direct investment (FDI), which the World Bank expects to decline by over 35%. 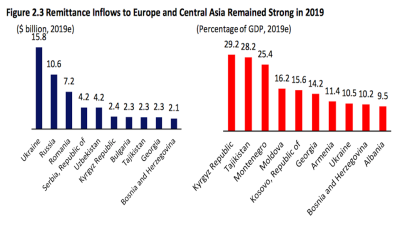 In absolute terms, Ukraine was the top recipient of remittances in the region, receiving almost $16bn in 2019.

This was a record high for the country, and a result of the rebound in economic activity in Russia. Russia is also a highly important source country for remittances to Central Asia, the South Caucasus and Moldova.

However, in 2020 remittances from Russia have already dropped sharply as a consequence of both the pandemic and the slump in oil prices.

Many of the Tajik migrant workers whose remittances account for a significant amount of Tajikistan’s cash inflows have returned home over the past few months due to coronavirus (COVID-19) driven recessions in the countries where they normally work, the Tajik economy ministry said on April 17.

“Azerbaijan, Kazakhstan and Russia, the region’s largest oil producers, are expected to suffer budget shortfalls, mounting pressure on their currencies, and possible recessions. Notably, the high dependence on remittances from Russia is likely to increase the impact of negative external shocks on the Central Asian economies of the Kyrgyz Republic, Tajikistan and Uzbekistan,” says the report.

The World Bank also references the weaker ruble, which means that even before the onset of the crisis, remittances to Kyrgyzstan dropped by 9% y/y in dollar terms in January-February.

On top of the financial blow to migrant workers from the region, the report also highlighted the precarious status of workers from Central Asia, who were "stranded at various airports after Russia and other neighbouring countries closed borders and grounded flights to the Kyrgyz Republic, Uzbekistan and Tajikistan, forcing them to camp out at the terminals for weeks until the issue was resolved by their respective governments.”

For Central and Southeast European countries, the major source of remittance payments is the western half of the EU, and with some of the world’s largest coronavirus outbreaks in the region’s largest economies, France, Germany, Italy and Spain, as well as in the UK, a similar fall is expected in remittances to the region.

Ukraine is largely dependent on remittances from Poland (around two-thirds of the total), the Czech Republic, Russia, the US and the UK, all of which have thousands of cases and lockdowns in place.

“Amid the COVID-19 pandemic, many Ukrainians working abroad, estimated at some 3mn-4mn, were having a difficult time finding employment as tightened border controls blocked many temporary and seasonal workers from moving throughout Europe, including within neighbouring countries. Some of them returned to Ukraine, though many were stranded abroad. It was reported that many short-term Ukrainian workers in Italy, the third-most popular destination (with 11% of Ukrainian migrant workers) after Poland (40%) and Russia (25%), were trapped behind a nationwide lockdown, unable to return home despite having expired visas,” says the report.

Warning of the human toll from the fall in remittances this year, World Bank Group President David Malpass said in a statement that they are a vital source of income for developing countries that help families afford food, healthcare and basic needs. “The ongoing economic recession caused by COVID-19 is taking a severe toll on the ability to send money home and makes it all the more vital that we shorten the time to recovery for advanced economies,” Malpass said.

In 2021, remittances to the region are anticipated to recover by 5.0%, which is close to the global average growth of 5.6% forecast by the development bank. However, it warns that medium-term downside risks dominate the remittance outlook for 2021, and the recovery from the crisis is “likely to be prolonged and arduous”.

US court rules Kyrgyzstan in contempt for pushing ahead with local legal action against Kumtor Gold
American personnel in Kyrgyzstan, Uzbekistan reported as among ‘Havana Syndrome’ victims
Russia shows tentative willingness to let US use Central Asia bases