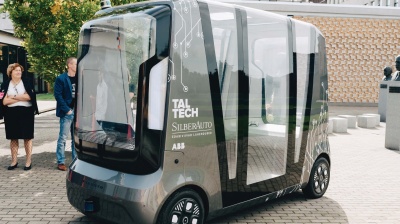 By Linas Jegelevicius in Vilnius November 5, 2020

The self-driving Estonia-made smart bus Iseauto, which last summer served passengers in Tallinn City, has started operating in the Greek city of Lamia.

As part of a pilot project for autonomous public transport led by Estonians, a self-driving street-approved vehicle will be operating in Greece for the first time in history. Known for its high-tech accomplishments, Estonia is set to gain ground internationally by offering its high-tech smart production.

The self-driving minibus manufactured by Auve Tech in Estonia is reportedly the first self-driving fourth category vehicle in Greece that has been declared street legal. The Greeks are said to have learned from the practice of the Estonian Road Administration when issuing the permit, which is why, in addition to technology, the Estonians have also helped to contribute to the development of public transport service legislation based on self-driving buses.

Estonian ambassador to Greece Priit Pallum welcomed the future-oriented cooperation between Estonia and Greece upon the launch of the Iseauto in Lamia. “Welcome to the future! Estonian companies are testing technology and service here in Lamia today, which will be the normality in 10 years," Pallum said.

Lamia mayor Thymios Karaiskos said at the opening ceremony that the experience gained from such testing provides an opportunity to become acquainted with new technologies, and it is important that research and development create more accessible services that improve the daily lives of all citizens without exception

Tallinn University of Technology (TalTech) is responsible for the development and testing of the scientific side of the project and innovative solutions, with whom the first prototype of the Iseauto was completed a few years ago.

Today, the TalTech autonomous vehicle research group, led by Raivo Sell, has become well-known around the world for its unique results, rapid development process and successful cooperation with private companies.