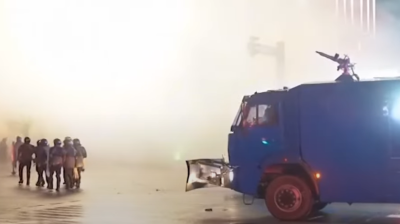 Scene at Almaty city government HQ, set ablaze after it was stormed by protesters.
By bne correspondents in Almaty & Prague January 5, 2022

Smoke was rising from the city government building and presidential residence of Kazakhstan’s largest city and commercial capital Almaty on the afternoon of January 5 as the country braced for a possible intensification of the anti-government protests that swept the country on the previous day.

Hundreds of protesters, some armed with rubber truncheons, stormed the mayor's office amid volleys of tear gas, stun grenades and rubber bullets from police, with reports of a fire breaking out in the building, RFE/RL reported. AFP reported that Kazakhstan's business lobby group said its members were reporting cases of attacks on banks, stores and restaurants. The news agency's correspondents in Almaty witnessed men dressed in police uniform throw down their shields and helmets into a pile and embrace protesters. Eurasianet reported that demonstrators were gaining the upper hand against the security clampdown. Violence was also reported in the northern city of Aqtobe, where police fired tear gas on protesters who tried to enter the regional government building by force, RFE/RL also said. Interfax quoted officials as confirming the presidential residence in Almaty was ablaze.

Earlier on January 5, the office of Kazakh President Kassym-Jomart Tokayev confirmed that Tokayev had accepted the resignation of the entire government following the unrest. A state of emergency remained in place in Almaty and the western town of Zhanaozen and surrounding region of Mangystau, where the first demonstrations broke out on January 2 over sudden vehicle fuel price hikes. Kazakh capital Nur-Sultan has also entered a state of emergency, with a curfew.

Almaty on the morning of January 5 was covered in an ominous, cinematic mist. Overnight, police had detained 200 of thousands of protesters that clashed with riot officers deploying tear gas and stun grenades. Though the emergency regime was in place, some people and cars could be seen passing through the city as per normal. Not everybody was aware of the violence that had occurred the previous day that stretched late into the night. Since the street protests grew substantial, Almaty’s internet has been almost entirely shut off across the city. Many Almaty residents were informed about events via word of mouth in phone calls with acquaintances and relatives.

In the violence, police vehicles were a particular target, though reportedly there were widespread calls made to attack government buildings as well.

In the morning, the initial indications were that the situation appeared to have calmed, but as the day wore on reports and comments by eyewitnesses showed that there were continuing pockets of protests across Almaty and by the afternoon it was clear that the unrest was far from over. Local and Russian media reports relayed various accounts of how protesters broke into the city’s akimat (municipal government building). Smoke was coming from its entrance. Other buildings on fire included a local office building of the ruling party, Nur-Otan (Radiant Fatherland) and a public prosecutor’s office.

“I was told not to come into work today,” one pedestrian told bne IntelliNews.

“There is a madhouse going on outside my home,” another Almaty resident said.

Security forces were deploying heavy-armoured vehicles, while men in military gear stood around areas where protesters were concentrating.

Cars could be seen forming lines at petrol stations as Almaty residents, alarmed that under emergency powers they could face a two-week lockdown, sought to fill up their vehicles with fuel.

It was at around 4pm local time that state-run media reported that Nur-Sultan was now also under a state of emergency, which will apply until January 19.

Zhanaozen, an oil town where the wave of protests started three days ago, is symbolic to many protesters as it was there that Kazakh authorities infamously opened fire at oil workers demanding better pay and conditions in 2011, killing dozens.

That tragic episode occurred on the watch of former president Nursultan Nazarbayev, who ruled for nearly three decades. Now 81, he is still seen as the ‘power behind the throne’. He controls the hugely powerful national security council, while Tokayev is his hand-picked successor.

Not a huge concession

Many Kazakhs will not see the dismissal of the government, with the appointment of previous first deputy prime minister Alikhan Smailov as acting PM, as a huge concession. The regime is very much controlled by the Tokayev administration, with Nazarbayev in the background.

The real attempt to address the grievances of the protesters lies in an announcement made by Tokayev on January 4 in which he said officials would meet on January 5 to address “the socio-economic demands” of protesters. Working class Kazakhs have long complained not enough rewards from the country’s oil riches flow to them, whereas a small elite sits on vast wealth.

The first concession from Tokayev was an order to governors to reinstate liquefied petroleum gas (LPG) price controls and broaden price controls to petrol, diesel and other "socially significant" goods. He also ordered a six-month moratorium that freezes utilities' prices and said subsidies would be made on rent payments for poor families.

Tokayev has also issued a proposal to develop a personal bankruptcy law, since many working class people in the country have been sinking in debt in recent years, with their woes starting even prior to the COVID-19 crisis.

While some groups, such as Oyan Kazakhstan (Wake Up, Kazakhstan) may have joined the protests in a show of solidarity for the oil town of Zhanaozen, the vast majority of those rallying were driven by their accumulated economic angst.

Looking at how the impacts of the coronavirus pandemic have taken a toll on the already beleaguered poorer end of the Kazakh population, it is clear that while the nominal average salary in the country stands at around Kazakhstani tenge (KZT) 250,000 ($575), most Kazakhs find their salaries at around $100-$150. Global pandemic-driven price rises caused inflation to hit a five-year high in Kazakhstan late last year, putting further pressure on the purchasing power of Kazakh citizens.

The January 1 removal of the price cap on LPG, the cheapest fuel option available to Kazakh drivers, was ultimately a touchpaper rather than the primary reason for the protests.

Whether Tokayev's moves so far are seen as sufficient to quell the unrest remains to be seen.