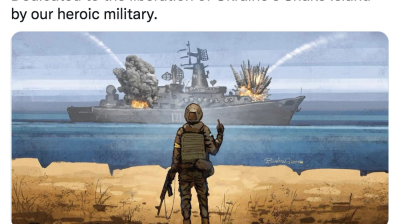 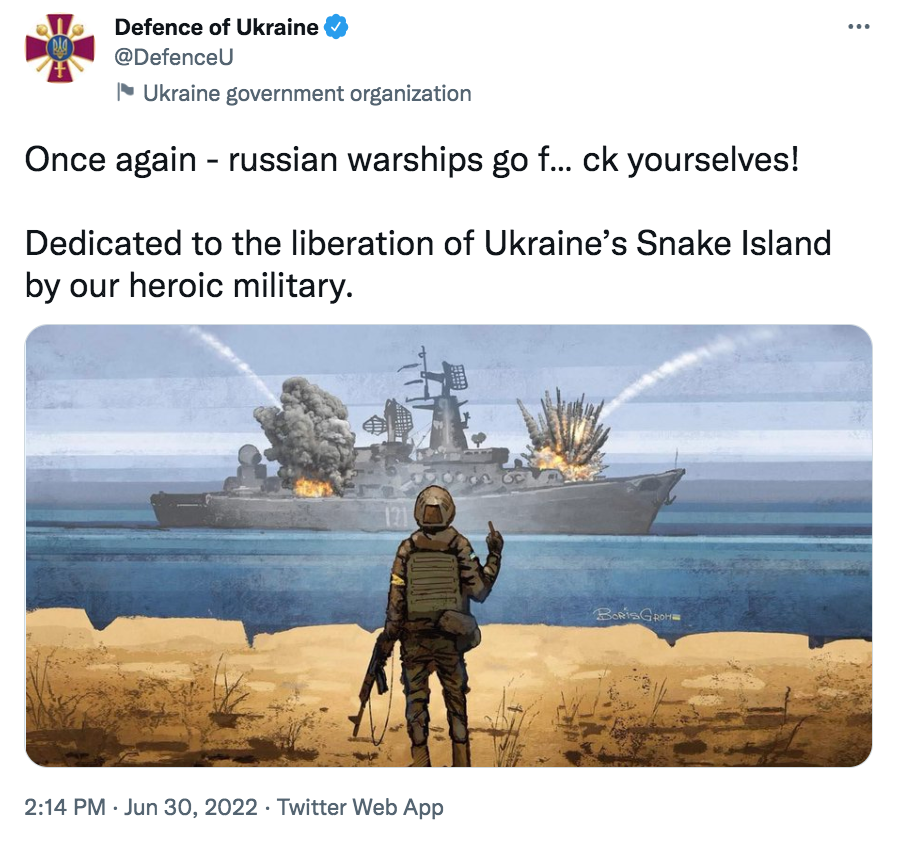 The Ukrainian narrative is that Russian forces could no longer hold on to the island and were forced to retreat under heavy fire. However, the Russian MoD published a different story, saying that Russian troops withdrew as a gesture of “goodwill” and because they had “finished fulfilling the assigned tasks” on Snake Island.

In a Telegram message the Russian MoD accuses Western media of spreading disinformation: “Fake: Russian troops have withdrawn from Snake Island, unable to withstand attacks by the AFU. Ukrainian sources and Western media, such as the New York Times, write this.”

However, Russia’s justification for leaving the island doesn’t actually debunk the Ukrainian and Western narrative but instead upholds it. The MoD claim that a lot of resources have been spent holding on to the island against Ukrainian attacks and the decision to leave was to prioritise the lives of Russian soldiers and prevent casualties.

“The Ukrainian side is trying to turn this into a victory, including with the help of international media, but there are no prerequisites for this,” the MoD stated.

The Russian narrative was also disputed by the British MoD, who claim that Russia withdrew “owing to the isolation of the garrison and its increasing vulnerability to Ukrainian strikes”, as opposed to a gesture of goodwill.

Instead, Russia’s fumbled attempts to retain some pride reveals what a significant victory this is for Ukraine, both symbolically and strategically, and marks a turning point in Ukraine’s defence of the Black Sea.

“Zmiinyi (Snake) Island is a strategic point, and it significantly changes the situation in the Black Sea,” Ukrainian President Volodymyr Zelenskiy announced in an address to the nation. “It does not guarantee safety yet, it does not yet guarantee that the enemy will not return. But it already limits the actions of the occupiers significantly. Step by step, we will drive them out of our sea, our land and our sky.”

After the sinking of the Moskva in April, the ship that captured the island on the first day of the invasion, Snake Island was left vulnerable to aerial attacks from Ukraine. The Kremlin struggled to bring anti-aircraft systems and radio-electronic warfare to the island due to its distance from Russia's Black Sea naval bases, the BBC reported.

With the island back under Ukrainian control, the threat to the nearby Odesa region is less severe. Nevertheless, Russian forces struck Odesa in the early hours of July 1, killing at least 18 and injuring 31, in what many believe is in retaliation for Snake Island’s liberation.

Soviet-era X-22 missiles, reportedly fired by aircraft from the Black Sea, struck a nine-story residential building and a leisure complex in Bilhorod-Dnistrovsky District. At least three children were killed in what Ukraine claims is an act of terrorism. A rescue operation is ongoing.