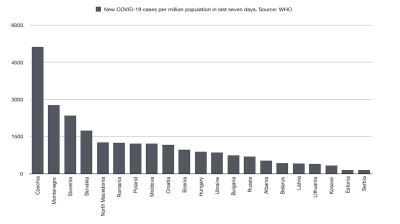 Soaring numbers of new coronavirus (COVID-19) cases in parts of Central and Southeast Europe have forced governments to impose new restrictions such as mandatory facemasks in public places and a shift to online learning, and some have warned a second lockdown may be inevitable if they fail to contain the spread of the virus.

Czechia in particular has seen an explosion in new cases, with 54,840 reported in the seven days to October 20 as reported by the World Health Organisation (WHO). At 5,129 per million inhabitants this is the highest in the region and considerably higher than in France and the UK – that saw Europe’s biggest tallies of new infections this week – in per capita terms. On October 16, Czechia broke another record in its COVID-19 one-day tally since the pandemic started, and posted 11,105 positive cases.

New cases per million inhabitants are above the 2,000 mark in Armenia, Montenegro and Slovenia, and topped 1,000 in Slovakia, Georgia, North Macedonia, Romania, Poland, Moldova and Croatia, as new infections surged across most of the continent.

The Czech government moved close to a second lockdown on October 21. Prague ordered most shops and services to close temporarily – except those selling food and other essentials – and urged people to limit their movements to essential trips such as for work and medical visits.

The measures were announced after Czechia reported a new record daily increase in infections, reaching 11,984 on October 20.

Earlier, Health Minister Roman Prymula warned of a tightening of anti-coronavirus measures as the healthcare system is approaching capacity. “I would very much plead for the already implemented measures to be respected, because we can see that they aren’t, which means that we will have to propose tougher measures at the government … We don’t have much time,” Prymula told the Czech parliament, Reuters reported.

Part of the problem is that many people have lost faith in the justification for emergency measures against the coronavirus and the government’s ability to handle the crisis. According to an October survey by the technology and consulting company Ipsos, reported by the Czech News Agency, fear of the coronavirus epidemic among Czech citizens has been growing recently; however, people do not follow the government emergency measures to mitigate the spread of the virus.

While in the spring, almost two-thirds of people in Czechia reduced their personal contacts, in October the share is only one-third. In May, most Czechs believed that the government had chosen a good course of protection against the coronavirus; now they usually have the opposite opinion.

The majority of the Czech population (over 80%) felt threatened by coronavirus in the second half of March, after the state of emergency was declared and the measures introduced. Gradually this number has declined, to 71% fearing the coronavirus in October.

In both Czechia and neighbouring Slovakia, fringe groups protested over the weekend against measures to contain the virus, with the two protests erupting into violence as protesters threw lit flares and firecrackers at police.

Slovakia, which racked up 9,471 cases in the last week, or 1,736 per million, is aiming to test virtually the entire population over the next two weekends, the government announced on October 18. “What other option do we have?” said Education Minister Branislav Groehling at the time, expressing the hope that other European countries would be inspired by the Slovak example.

In the region’s most populous country, Poland, Health Minister Adam Niedzielski has warned that if the current growth rate of new coronavirus infections continues, there could be 15,000-20,000 new cases daily as soon as this week. Construction of temporary hospitals started in Warsaw and provincial capitals during the weekend, and there are plans to require private hospitals to also provide beds for COVID-19 patients.

Romania’s capital Bucharest has entered the “red scenario” as cases have increased, meaning schools have been closed and education moved online for two weeks alongside other measures. Similar steps may be taken soon in other parts of the country. President Klaus Iohannis said on October 19 that the country had been “thrown into chaos” by the pandemic. Romania has reported 24,865 cases in the last week.

Elsewhere in Southeast Europe, tiny Montenegro remains the worst hit in per capita terms, with 1,746 new cases in the last week, or 2,780 per million of the population.

There was a sharp increase in new infections in Slovenia, where the government has declared a 30-day state of epidemic starting from October 19. Cases were up by 150% in the last week, the highest one-week increase it has experienced so far, according to the WHO. The state of emergency includes a nightly curfew and a ban on gatherings of more than six people.

Overall, the European region has continued to report a rapid increase in cases and deaths, said the WHO on October 20. The region, which includes Central Asia, the South Caucasus and Turkey, reported 927,000 new cases in the past week, up 25% compared to the previous week. This is over three times more cases reported per day compared to the April peak.

France, the UK, Russia, Czechia and Italy accounted for over half of all reported cases in Europe in the last week.

The number of deaths also showed a 29% week-on-week increase, the WHO said, though the fatality figure is well below the April level.

Globally, the largest numbers of new cases were reported in India, the US, France, Brazil and the UK.