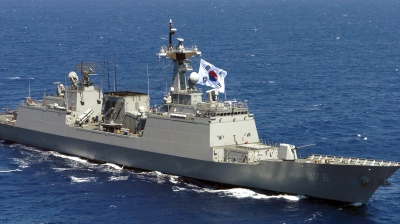 ROKS Munmu the Great (DDH-976) is a Chungmugong Yi Sun-sin-class destroyer in the South Korean navy. It could be on the way to the Gulf.
By bne IntelliNews July 29, 2019

The dispatched Korean naval unit will reportedly include a destroyer and will help guard oil tankers sailing through the Strait of Hormuz.

Against the backdrop of tensions over what Iran says is a US “economic attack” on its economy, several oil tankers have been attacked and the UK-flagged Stena Impero has been seized by Iranian commandos. Iran still denies it had any role in the attacks. Insurance costs for tankers transiting the Strait of Hormuz have increased massively.

Maekyung cited an unidentified senior government official as saying South Korea had decided to send the anti-piracy Cheonghae unit operating in waters off Somalia, possibly along with helicopters.
Seoul’s defence ministry was reported as saying the government was exploring measures to protect its ships in the area but no decision had been made.

US Secretary of State Mike Pompeo said last week Washington had asked South Korea, Japan, France, Germany, Australia and others to take part in providing naval escorts for tankers. But the European powers, who are happy to stick with the existing nuclear deal with Iran and are opposed to the heavy sanctions the US is using to try to force the negotiation of a tougher accord, are wary of getting sucked into hostilities between Tehran and Washington. They have been looking instead at a UK proposal for a European protection fleet.

Iran appears to have seized the Stena Impero in response to the July 4 UK Royal Marine operation off Gibraltar that resulted in the seizure of Iran’s Grace 1 tanker. Iran says the UK captured the vessel at the behest of Washington. The UK claims it was following an EU policy to stop vessels illegally delivering oil to blockaded Syria. However, the EU has remained silent on the matter.

On July 29, new UK Foreign Secretary Dominic Raab said there was no scope for the countries to exchange seized tankers, on the basis that the UK ship capture was legal whereas the Iranian seizure of the Stena Impero was illegal.

He said Iran needed to “come out of the dark” if it is to follow international rules and release the British-flagged tanker .

“If the Iranians want to come of the dark and be accepted as a responsible member of the intentional community they need to adhere to rules-based system of the international community,” Raab told Sky News. “You cannot go about detaining unlawfully foreign vessels.”

Tehran is angered that while the UK is officially opposed to the US abandonment of the nuclear deal and imposition of sanctions, it, and the other big European powers, have done little to protect the Iranian economy from US sanctions.

The UK defence ministry said on July 29 that a second warship, the HMS Duncan, had arrived in the Gulf to support the passage of British-flagged ships through the Strait of Hormuz, joining the HMS Montrose.