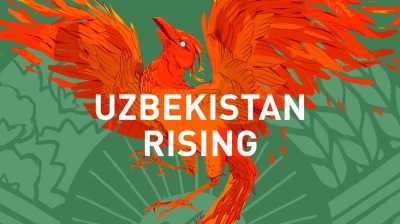 Uzbekistan is flourishing as five years of reforms start to bear fruit, and the economy is booming. / bne IntelliNews
By Ben Aris in Berlin January 4, 2022

Uzbekistan’s economy has taken off in the last two years as the reforms implemented by Uzbek President Shavkat Mirziyoyev start to bear fruit. The country has become one of the most dynamic in the region, is ploughing ahead with a comprehensive reform agenda and is probably the best investment story in the whole Former Soviet Union (FSU).

bne IntelliNews has reported extensively on these changes and gathered together a series of recent articles into a special report for easy reference that covers the business, economics, finance and politics of the country.

You can find more information on our website in the Uzbek section here. And sign up for free two-week trial to bne IntelliNews' premium PRO news service, where we report on the country’s news on a daily basis. See a sample here and register for the two-week trial here.

Download a pdf copy of the whole report here.

Read an e-reader version of the report online here.

Our cover story is a bird's eye view of the changes the country has been through recently.

Mirziyoyev won a second term as president in a landslide victory at the end of last year, but was criticised, as no opposition figures were allowed to participate in the election. However, the president has embraced a much older form of social organisation based on the Mahalla, small local community organisations that interact directly with government.

The Ministry of Finance organised a flagship conference to showcase the current reforms and announce several big privatisation deals.

Cotton has long been the “white gold” of Uzbekistan but in a radical reform the government sold the entire sector off to local investors. It is the most comprehensive privatisation to date and has already transformed the sector.

As part of the government’s attempts to move up the value chain, the export of raw cotton has been banned, forcing everyone in the sector to invest into textile production. Exports have already more than doubled, while the revenues earned have quadrupled.

The hoovers of Nukus

In the sandy desert of Nukus in western Uzbekistan Artel, the country’s biggest white goods manufacturer, set up a hoover assembly factory that now serves the entire region and increasingly is exporting as far afield as Asia and Africa.

The economy has been growing by more than 6% a year for several years. While it took a hit in 2020, Uzbekistan was one of only two countries in the world that didn't go into recession before bouncing back to regain its 6%-plus growth rates in 2021.

Uzbekistan’s national oil and gas company tests the water in the international capital markets with a successful Eurobond issue to raise investment capital.

Like every other country in the world Uzbekistan is struggling to contain rising prices. The central bank has now introduced a policy of inflation rate targeting, but it will take several years to anchor expectations and bring inflation under control. However, most of the other macroeconomic indicators are very healthy, the bank told bne IntelliNews in an interview.

Banking reform is underway with two banks sold and some of the biggest in the country on the docket for sale soon. The sector is being cleaned up but there is still a lot of work to do, says Fitch.

Many of the Soviet era state-owned assets are being transformed and business is booming on the back of strong economic growth. Qizilqumsement is the largest cement maker in Central Asia and has invested several billion dollars into a new production line, as its output can’t keep up with demand.

Savitsky's museum, the Louvre of the Steppe

Soviet-era art collector Igor Savitsky rescued almost an entire generation’s worth of Soviet impressionist art from Stalin’s police after the genre was banded and artists were imprisoned or shot. He whisked the collection of over 80,000 canvases away to the small desert town of Nukus where they remain today – probably the second-biggest collection of impressionist art in the world and an Aladdin’s cave of masterpieces that remain largely unknown.

Uzbekistan's privatisation programme has been in development for several years, and now the first wave of candidate companies has been prepared the number of auctions is snowballing. 2021 has already seen more sales completed than all the sales made in the last four years taken together.

Nothing says “transformation” like mobile phone ownership and in the last five years Uzbekistan has seen an explosion of smartphone sales and telecoms services as the state-owned national champion Uztelecom has invested heavily into its infrastructure and vastly expanded its services to become the biggest player in Central Asia.

Uzbekistan's most profitable bank, UzPromStroyBank (known locally by the Uzbek language abbreviation SQB), is going to be the first big bank to be sold off as the country’s banking sector privatisation gets under way. Two smaller banks have already been sold this autumn, but the sale of the big banks is just starting and SQB will probably have new shareholders sometime next year.

Growth is already strong but the country has meagre domestic resources and has reached out to the international financial institutions (IFIs) and international investors to help it bootstrap its economy, Uzbekistan’s deputy Finance Minister told bne IntelliNews in an interview.

NavoiAzot's renovation was kicked off in 2016 with some state-guaranteed credits, but since then it seems the investment drive has reached a critical mass, and NavoiAzot has attracted several partners. Business is booming.

Uzbekistan under its new president, Shavkat Mirziyoyev, is a country gearing up for a bright future – in that the president wants to make sure there is enough power to keep all the lights on as both the economy and the population are growing fast.