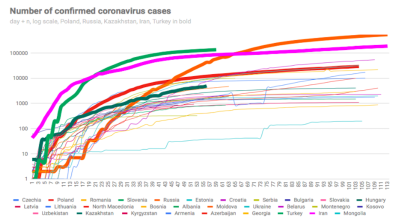 As governments continue to lift lockdowns and travel restrictions across Central, Eastern and Southeast Europe, several countries in the region have reported record-high numbers of new infections in the last few days.

Ukraine has recorded record-high new infections for five days in a row as it appears a second wave of infections has hit after the government eased restrictions in the last few weeks.

The number of coronavirus (COVID-19) cases in Ukraine rose by 656 in the past 24 hours and the daily number has been steadily exceeding the 600 mark for the past five days, Health Minister Maxim Stepanov said on June 15, as cited by Tass.

"We see that the number of confirmed coronavirus cases in the past five days was consistently over 650. On one day, we had 753 [new] cases. We set record-high infection rates," the minister continued. 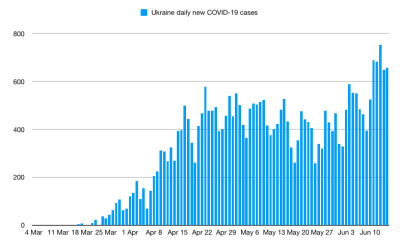 Kyiv faces a similar dilemma to other countries in the region, especially those without the financial firepower to sustain their economies through a lengthy lockdown.

The Ukrainian government has been under enormous pressure to open up again as soon as possible, and has been lifting restrictions in the last few weeks. However, it seems the government has acted too soon, as infections have soared as a result.

There is better news from Russia, which has by far the region’s largest tally of coronavirus cases, at 537,210 as of June 16. Moscow recently lifted restrictions, allowing people to go outside without needing a pass, and other Russian regions are also easing restrictions. On June 15, Russia reported 8,246 new COVID-19 cases, which was the lowest daily increase since May 1. 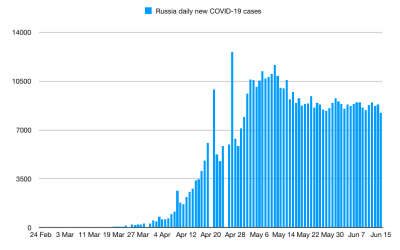 In Moldova, the number of new infections peaked at 406 on June 11, and has remained high since then, with the number of active patients steadily rising. This upward trend emerged 10 days after the first wave of relaxation of lockdown measures.

In response, Moldovan President Igor Dodon brought army officers on to the streets on June 13 to monitor the enforcement of the sanitary measures. But despite Chisinau’s concerns over the rising number of new cases, few of the relaxations made recently have been reversed.

Armenia is another small country that is struggling to contain its epidemic. The daily number of new infections has been rising in the country of 3mn people. 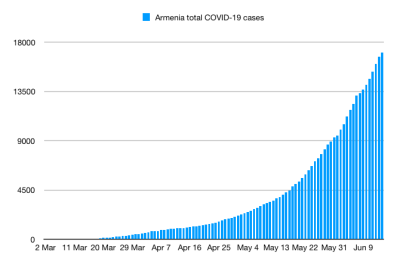 On June 12, Armenia reacted by extending its coronavirus outbreak state of emergency for another month until July 13. However, back in early May Yerevan chose to reopen almost all sectors of the economy, fearing that continuing with the general lockdown would cause too much lasting economic damage to the impoverished country.

Kazakhstan responded to a fresh spike in new infections by locking down several towns and villages in the central Karaganda region on June 11, a month after the country's nationwide state of emergency was brought to an end. Retailers and public transit will work shorter hours and private cars will be banned from moving at night in the central Karaganda region starting from June 13, the government said in a statement.

Albania’s Prime Minister Edi Rama warned citizens that the government could re-impose lockdown measures due to the rising number of coronavirus cases, which are related to people failing to respect safety guidelines. The authorities started to ease restrictions more than two weeks ago, which was followed by a spike in the number of new infections.

By contrast, North Macedonia’s President Stevo Pendarovski decided on June 12 to end the state of emergency which expired at midnight the following day, despite the rising number of new coronavirus cases. 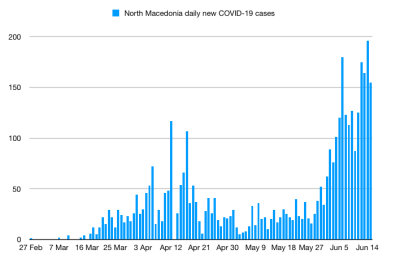 This opens the way for North Macedonia to hold its long-delayed general election in July.

It is just one of several countries from the region that is heading for elections in the coming weeks, despite lingering concerns over the risk of infection.

Croatia’s parliamentary election will be held on the same day, after the parliament was dissolved in May. Daily new cases in Croatia have been close to zero for several weeks now.

Serbians will go to the polls on June 21 in an election that is almost certain to give another term in power to President Aleksandar Vucic’s Serbian Progressive Party.

Poland will hold its presidential election on June 28, in a vote that will test incumbent Andrzej Duda’s ability to see off a challenge from Warsaw Mayor Rafal Trzaskowski, who is running for the centre-right Civic Coalition (KO).

Russian banks extend profits in August, on track to earn a record RUB2.5 trillion this year
11 hours ago
Russia’s PPI inflation up 1.5% to 28.6% in August
1 day ago
Montenegro’s economy posts strong 19% y/y growth in 2Q21, higher than EU average
2 days ago
Russia’s Duma elections statistics: the comet effect and the Moscow blob
4 days ago
Romania and Latvia's car ownership rates among lowest in Europe
4 days ago