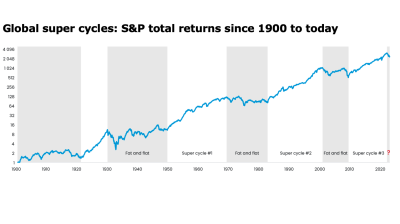 A decade-long super-cycle of low inflation and lots of liquidity in capital markets has come to an end. Going forward it will be harder for investors to make money, but there will be fat periods as well as flat periods. / bne IntelliNews
By Ben Aris in Berlin December 15, 2022

The global economy has been through some enormous changes in recent years, leading investors and analysts to believe we are at the start of a new high-inflation, lower-growth super-cycle that could last for as long as a decade.

Driving the changes is the de-globalisation of industry that was already underway before the coronavirus (COVID-19) pandemic persuaded everyone to shorten supply chains and carry more inventory. The rapid growth of online retail and the breathless pace of technological advance also led to big productivity gains that also fuelled a decade-long boom, but this too seems to have passed its peak. And finally the escalating clash between East and West that started with Russia’s invasion of Ukraine, but will surely soon involve the US in a showdown with China, has only catalysed the creation of fractured world, as featured in a recent bne IntelliNews cover story.

“After two decades of ultra-low interest rates and abundant liquidity, 2022 has likely marked the end of a lucrative equity super-cycle. We expect that we are entering a period of “fat and flat” returns, which will be characterised by heightened volatility and more modest real returns as central banks withdraw $2 trillion of liquidity from the system in 2023,” Peter Elam Hakansson, chairman and CIO of Sweden’s East Capital Group, with partner Jacob Grapengiesser said in an end of year strategy note release on December 13. “For equity investors, returns in 2023 specifically will likely hinge on a few key questions such as whether the US will be able to engineer a soft landing whilst bringing down core inflation, when China will open fully and if there can be an end to the conflict in Ukraine.”

The world has just enjoyed an unprecedented period of low inflation and strong growth that has benefited equity investors, but the new super-cycle brings tougher conditions and lower growth, made worse by the worsening geopolitical tensions. However, these changes will probably benefit the emerging and frontier markets, where growth will remain strongest.

Hakansson and Grapengiesser say there have been four super-cycles since 1900: the swinging 20s of the Belle Epoque; the post-WWII recovery period in the 1950s; the start of the technological revolution in the 1980s that ran through the fall of the Soviet Union; and the most recent globalisation boom of the last decade that was pumped up by central banks’ quantitative easing and low rates following the 2008 financial crisis.

“Since the start of quantitative easing in 2008, G4 central banks’ balance sheets (Fed, Bank of Japan, European Central Bank and Bank of England) have increased from $4 trillion to a peak of over $26 trillion. Since February 2022 (i.e. Covid-19), this figure has increased by a staggering $11 trillion, or by 72%, and markets rose by 40%, to their peak, despite the impact of Covid-19 on the global economy. More generally, this has been one of the key drivers for the equity super-cycle, where global equity markets rose by some 422% from their lows in early 2009,” Hakansson and Grapengiesser said.

The periods in between fluctuate between “fat and flat” returns for investors and make it harder to lock in long-term real returns.

The previous super-cycle was suddenly halted as inflation soared, catalysed by the coronacrisis and now the global polycrisis. One of the results of these fragmentation factors is that inflation is likely to stay higher for longer, forcing central banks to tighten monetary policies, which will in turn depress growth.

As we move into this new period the returns on equities have all fallen into the red, while the only things rising are commodities. A sign of how far things have already gone is the yields on bonds have overtaken those of equities, which is usually a sign of the early stages of a period of depression: equity prices are formed on the basis of a discounted expectation of future growth; when equity yields are below those of bonds investors are expecting low growth, but high volatility. 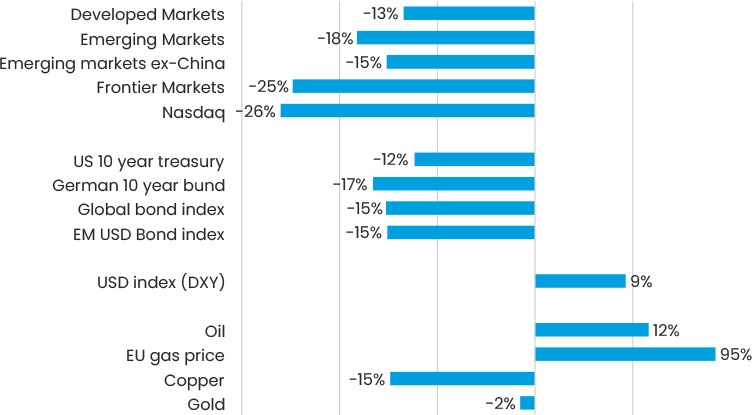 *Total returns year-to-date in USD apart from German 10-year bund, which is in EUR 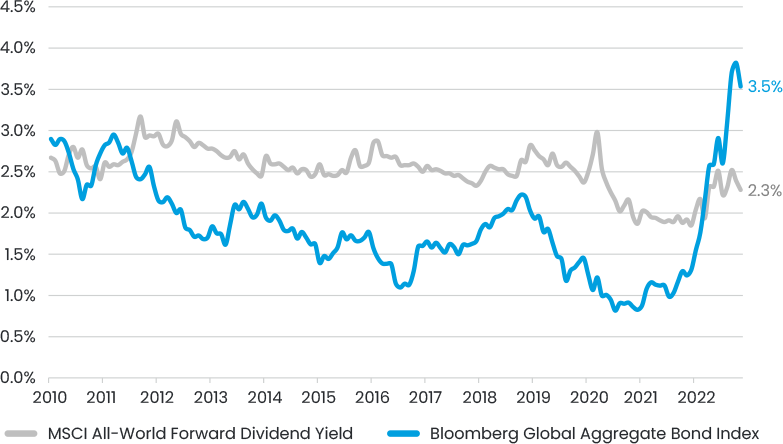 Quantitative easing is now coming to an end and interest rates are rising again. Since June this year central banks are starting to take that extra liquidity out of the market, which will deflate valuations. And this is likely to continue all next year as well, says Hakansson and Grapengiesser, estimating that central banks will probably withdraw some $2 trillion from the markets, or 8.5%, to the total balance sheets.

“For what investment liquidity that is available, equity markets will have to grapple with the new acronym in town; TINA becomes TARA, i.e. 'there is no alternative' becomes 'there are reasonable alternatives',” says Hakansson and Grapengiesser. “This is clear from [the chart above], showing global bond yields are now higher than dividend yields for the first time in more than 10 years.”

Other factors weighing on the international markets include China, which has been on lockdown again due to surging COVID infections, which now appear to have peaked.

The surging value of the dollar and the round of tightening by the Fed earlier this year have also sucked money out of emerging markets, but the dollar’s rise also seems to have peaked, according to Hakansson and Grapengiesser. 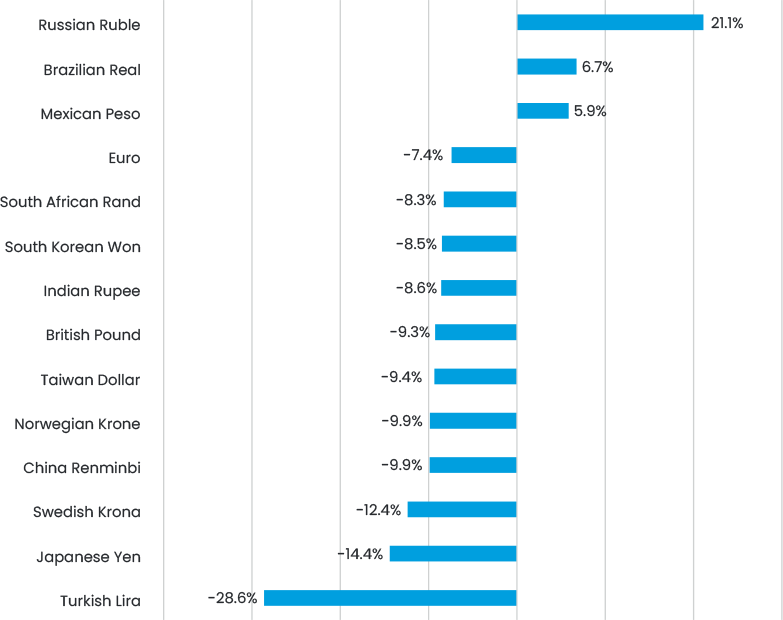 The emerging markets should be winners from these changes as the growth differential between the EMs and the developed world will be wide for years to come – seven years based on the IMF forecasts, according to Hakansson and Grapengiesser.

Frontier markets should do even better. These markets have been largely ignored by international investors over the last three decades as they are generally too small or too poor, whereas the faster growing and much bigger markets of countries like Russia and Turkey offered all the risk/return profile most investors were willing to swallow.

But over those three decades all these Frontier markets have made remarkable progress and interest in them was already beginning to rise as the traditional EM favourites started to mature. Romania in particular stands out after it was upgraded from Frontier to an Emerging market in September 2020, opening up a new pool of liquidity in the process.

“An even better investment idea is to blend Frontier markets with select smaller Emerging markets in a bid to improve the risk/return profile even further while making the universe more appealing to a larger investor base. To create an improved benchmark which might become mainstream for investors seeking uncorrelated returns, we recently initiated an engagement with MSCI and will report back if we see tangible developments on the process,” Hakansson and Grapengiesser suggested to their investors.