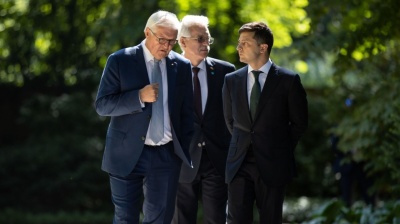 Former German foreign minister Frank-Walter Steinmeier confirmed he proposed the so-called Steinmeier Formula in 2015 as a way to break a deadlock over implementing the stalled Minsk II process, contradicting former Ukrainian president Petro Poroshenko who denied the proposal was made.

At the same time a planned ceasefire that is a precursor to the upcoming, and first face-to-face meeting between Russian President Vladimir Putin and Ukrainian President Volodymyr Zelenskiy, failed, putting more pressure on Kyiv ahead of difficult negotiations with Russia.

The adoption of the Steinmeier formula has proven contentious, but has also been surrounded by confusion as polls in Ukraine show that few understand the details of the proposed deal.

Steinmeier, who is now Germany’s president, suggested the introduction of special temporary local self-government rule in some areas of the Donetsk and Luhansk regions to allow local elections to go ahead in Donbas, as required by the Minsk II deal. The arrangement would become permanent if the OSCE signed off on the results as free and fair.

Poroshenko rejected the deal and remains opposed to it, claiming accepting it would be tantamount to capitulating to Russia and ceding territory to Russia. Poroshenko was prominent amongst the 10,000 demonstrators that attended a “No Capitulation” demonstration on Maidan square at the weekend.

Zelenskiy signed off on the deal last week as a necessary step to restart the Normandy Four (Ukraine, Russia, France and Germany) meetings. Zelenskiy stressed that the elections will happen under Ukrainian law, and insisted that combatants withdraw and that Kyiv takes control of the Russian-Ukrainian border again before any elections can happen.

In his first public comments on this deal, Steinmeier confirmed he proposed the deal, which was an attempt to simplify the difficult process of fulfilling the Minsk Accords when the Normandy format talks in Paris stalled, he told the BBC.

“The steps that were supposed to have taken place by both sides were too great,” Steinmeier said. “That’s why the formula doesn’t involve anything more than an attempt to make from large steps, which the conflict’s participants didn’t want to make, a series of smaller steps that – despite their essence and consequences – still need to be agreed upon.”

Poroshenko also alleged that Putin refused to adopt the German version of the formula at the time and worked out a separate version. “That argument is strange to me considering one of the representatives of the then-president was present,” Steinmeier said.

“It was understood to everyone that our view of Minsk and the Putinist view were diametrically opposed,” Klimkin said, at which point Steinmeier proposed a series of steps in the event that elections in occupied Donbas are held and approved. “This didn’t lead to anything, after which there was an interesting meeting of the ministers, during which we discussed these ideas for about three hours. And that didn’t end with anything. And then the well-known idea was born, the letter of Steinmeier and [former French foreign minister Laurent] Fabius, in which they outlined at least the logic of the proposal. And then wrote that this is an idea for further talks. So there was never any kind of defined formula.”

The reaction to Zelenskiy's decision to accept the Steinmeier framework – many of the details still need to be settled and will be the subject of the upcoming Normandy Four talks – has been strong, with Ukrainian nationalists and Poroshenko supporters fearing an attempt to appease Russia and the lost of sovereignty over the Donbas region. Zelenskiy's team claimed that the protests at the weekend were a paid-for provocation and downplayed the opposition to the deal. Zelenskiy does have a huge mandate to attempt a peace process after he was swept into office earlier this year with 73% of the votes, and led his campaign on bringing an end to the undeclared war in the Donbas.

“No Capitulation is a very dangerous statement,” said Bohdan Yaremenko, a People’s Servant MP and head of the parliamentary foreign relations committee. “It’s a statement on misunderstanding what has happened. The capitulation, if it happened in Ukraine, was when the foundation was set for all that has suddenly began to worry people, the Steinmeier formula and so forth. That was September 2014 and February 2015, when the Minsk Accords were signed, which has all that that (former president Leonid) Kuchma agreed to in September this year.”

In referring to Kuchma, Yaremenko meant the signed letter to OSCE envoy Martin Sajdik in which the former president, serving as Ukraine’s representative to the Minsk peace talks, agreed to a version of the Steinmeier formula outlined in two paragraphs. The letter was also signed by Boris Gryzlov, the Russian representative to the Trilateral Contact Group in Minsk, and the representatives of the Donbas self-proclaimed republics.

While there is progress on the diplomatic front, there has been little on the military front where the conflict remains frozen.

A mutual withdrawal of forces from two Luhansk frontline towns planned for October 7 didn’t happen after a ceasefire failed, which the Ukrainian authorities blame on the Russian-backed fighters, Ukrainian Foreign Minister Oleh Prystaiko said on October 8.

“The withdrawal was supposed to begin today,” he told reporters. “Our negotiating teams agreed to this in Minsk. To great regret, you know yourselves that that Petrivske and Zolote were shot upon several days ago. Our decision was for the withdrawals to begin on the seventh day after peace was maintained without shootings on these specific areas.” As a result, the Ukrainian government will wait until a ceasefire is achieved for seven consecutive days, he said.

Getting some sort of working ceasefire would improve the atmosphere at the upcoming Normandy Four talks, but ceasefires have proven hard to enforce in the past.

The withdrawals planned for Zolote and Petrivske involve the removal of Ukrainian soldiers while maintaining fortification structures in place, Prystaiko said. If Ukraine sees that the Russian-backed fighters are not fulfilling the agreements or are planning aggressive actions, then Ukrainian soldiers will return to their positions.

The Russian Presidential Administration has a “certain influence” on the self-proclaimed Donetsk and Luhansk republics, but can’t guarantee the withdrawal of forces, spokesman Dmitry Peskov told reporters on October 7, reports Tass. “You know that the Donbas republics are sovereign actors in resolving this conflict,” he said, repeating the position that Russia is not a side in the conflict.

Prystaiko told a television talk show on October 7 that he doesn't believe the Russian side is ready for a Normandy Four meeting and the breakdown in the ceasefire is a way of putting more pressure on Kyiv.

“The meeting is being delayed further and further,” he said, adding his view that Putin is satisfied with the current situation in Donbas. “These $1.5bn, maybe $2bn that he spends to keep us tied to himself – as he’s doing in Transnistria, Abkhazia and Ossetia – it seems to me suits him,” Prystaiko said.

Analysts speculate that Putin is in no rush to do a peace deal with Ukraine and that Putin is using the conflict to test the neophyte Zelenskiy. Any progress toward peace comes as a boon to the Zelenskiy administration and commentators widely believe that Putin has no interest in seeing a strong pro-democracy leader at the head of a flourishing Ukraine as that will undermine his position at home.

“Russian President Putin has the Ukrainian president just where he wants him, which is a political trap that Zelenskiy set for himself when he and his foreign minister set deadlines for ending warfare in Donbas,” Zenon Zawada of Concorde Capital said in a note. “So it’s logical that Putin not only extend the current situation, but exacerbate it by making the conditions for ending warfare as difficult as possible for Zelenskiy. In this way, Putin will either (1) get the capitulation that he is seeking from Ukraine, prompting a possible violent conflict in Ukraine that also plays into Russia’s hands, or (2) get Zelenskiy to discredit himself on his main campaign promise, undermining his public trust and further destabilising Ukraine’s political system.”