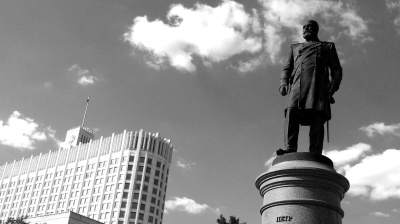 Pyotr Stolypin is famous for his reforms to Imperial Russia's agricultural sector.
By Mark Galeotti July 10, 2020

As Washington continues its strategic retreat from anywhere that doesn’t have a Trump Tower, there is a growing concern that Moscow is moving in to fill the strategic vacuum. However, while the Kremlin undoubtedly has an agenda in a wide arc of Middle Eastern and North African countries, from Algeria to Afghanistan, that does not mean a true strategy. Even the Soviets were never able to maintain stable hegemony in the region, and today’s Russia is in a rather more constrained situation. That doesn’t mean that it doesn’t have instruments and options. Their use, though, is less in support of a grand strategy, so much as some opportunistic scavenging of quick and easy political bargains.

The sale of the sovereignty

One crucial difference between today’s Russia and both the USSR and the US is that it will not – cannot – pay the price of empire, whether in blood or treasure. The current deployments to Syria and Libya are relatively modest interventions, and in both cases mercenary (or more accurately pseudo-mercenary) forces such as Wagner have taken on most of whatever ground fighting may be required. The “deniability” provided by Wagner and the growing array of new state-linked private military companies (notably Shchit and Patriot) is not so much to the outside world as to Russia’s own people, unenthused as they are by the prospect of their boys coming home in body bags from distant wars about which they just don’t care.

This helps illustrate one of the limitations on Russia’s role in Afghanistan. Although the tale of bounties on American soldiers sounds far-fetched, there is no question but that Moscow is trying to buy and build relationships in this troubled country. After all, it matters to the Russians, from its role as the source of the heroin that is still such a scourge to them (they have the highest per capital consumption levels in the world) to the threat of becoming a source of chaos and jihadism able to spill over into Central Asia and beyond. However, the shadow of the ten-year Soviet war in Afghanistan in 1979-88 hangs over all these calculations. The Russian people – and a still-scarred officer corps – are deeply leery of opening another “bleeding wound” as Mikhail Gorbachev put it. Instead, Moscow will seek to work through local proxies.

This will cost money, and Moscow can afford to spend a little. But not that much. The days of bribing nations with dams and airports (like the Chinese today), and with arms sales on eternal credit, are long gone. Instead, Russia is hoping to make a little money, with an oil deal here and a nuclear power station there.

Instead of guns and money, what Moscow is offering is sovereignty. Or rather a promise to support the sovereignty of states and often-unpleasant regimes, against a perceived threat from a Western-dominated, normative order. At a time when international relations are getting more politically and economically interventionist, with new controls, sanctions and pressures relating to everything from corruption to environmental standards, democratic values to child labour laws, Russia is offering to be a protector of an individual regime’s freedom to steal from its treasure, pollute its rivers, oppress its citizens and exploit its people. That is a glib way of putting it, but the appeal of a powerful and determined ally in a time of finger-wagging and sanctimoniousness is undeniable.

Stuck in the MENA with You(SA)

So Moscow is on our side. It will sell you weapons to defend your borders, rent you mercenaries to use them, offer political technologists to help you rig your elections, buy your oil or diamonds without worrying too much how much you skim off the top.

The limits to Russia’s real power in the region are, however, evident. If you want mercenaries, you will probably have to pay for them (or get a friend to do so – Wagner’s deployment to Libya, for example, is reportedly underwritten by either the UAE or Saudi Arabia). Their political technologists may be willing, but they aren’t necessarily much good, and even when it comes to bugging your enemies, you’d probably prefer Israeli security firms to Russian.

China, obviously, is an increasingly important player in the region. Its Belt and Road Initiative has become a juggernaut of political influence-buying, in the guise of infrastructure investment. The Chinese have a hand in a range of showcase megaprojects, from tunnels under Cairo to an airport in Dubai, as well as growing activity by the Export-Import Bank of China and Sinosure, its export credit insurer.

It is not yet a serious political player, though, and for all its headline withdrawal, it is impossible to escape the extent to which the US is still the last superpower, especially when it works in – often strained, these days – partnership with the EU. Even considering the COVID-era slowdown, China has been the largest foreign direct investor in the MENA region and the Arab States’ largest trading partner, but the US remains the primary security power in the region, and money from the region heads to the West, not the East.

Russia somehow has to find a place for itself between China and the US. President Vladimir Putin is committed to asserting Russia’s status as a great – global – power, and part of this entails a role in addressing every important world issue. None can be resolved without Moscow being at the table and, by extension, if it is not, then it will ensure that there can be no resolution. Its involvement in Libya and, to a lesser extent, Syria and Afghanistan reflect this determination to inject Russia into problem areas to acquire a degree of leverage and status.

This is not a new “scramble for Africa”, as Emily Couch has noted. It does not have “imperial goals” in the Middle East.

Indeed, there is no real strategy, nor yet a belief that Moscow can prevent either Beijing from buying what it wants or Washington from remaining the pre-eminent political and security influence in the region. There is no dream of regional dominance, let alone a philosophical bloc rejecting Western (or Christian) culture. Rather, there is an opportunistic series of short-term, low-risk and low-cost adventures and deals, hoping to make whatever profit and political capital can be won in this historical moment in which the tide of American power is ebbing, and the tide of Chinese money has yet truly to come in.

Dr Mark Galeotti is director of the consultancy Mayak Intelligence and also an honorary professor at UCL School of Slavonic & East European Studies, a senior associate fellow at RUSI and a senior non-resident fellow at the Institute of International Relations Prague. He blogs at In Moscow’s Shadows and tweets as @MarkGaleotti.