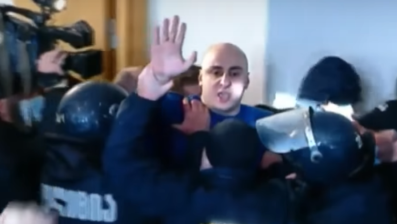 Opposition leader Nika Melia was led away amid scenes of chaos in late February after police broke their way through barricades at the UNM party HQ.
By Iulian Ernst in Bucharest April 20, 2021

Georgia’s ruling party Georgian Dream has accepted a revised draft agreement proposed by European Council President Charles Michel, which has also been signed by most of the opposition parties and several individual MPs of the main opposition party United National Movement (UNM).

The signatures may be enough to put an end to the chronic political crisis in the country that started with the general election held last October and was greatly exacerbated with the arrest of UNM leader Nika Melia in late February.

The agreement paves the way for the release of Melia and another jailed opposition figure, sets forth an array of electoral and judicial reforms and, most crucially, will allow parliament to function more normally after months in which most opposition MPs refused to take their seats because of intractable disputes over alleged rigging in the election, Politico reported.

Specifically, the agreement as published by Georgia Today, guarantees the release of Melia within one week after the signing of the document by Georgian Dream, while President Salome Zurabishvili said that she was ready to pardon, under certain conditions, Giorgi Rurua, a shareholder of the opposition-minded TV channel Main Channel.

In relation to the possibility of an early general election, the agreement provisions that the ballot should be organised for 2022 unless Georgian Dream gets more than 43% of the proportional votes in this year’s local elections. Besides the release of the two opposition figures involved in cases seen as politicised, this amounts to a major concession made by Georgian Dream that guarantees that even without UNM’s signature on the agreement, the way is paved to sustainable political developments.

The parties took note of the assessment by OSCE ODIHR as regards the general election, according to which “the election was competitive and, overall, fundamental freedoms were respected. Nevertheless, pervasive allegations of pressure on voters and blurring of the line between the ruling party and the state reduced public confidence in some aspects of the process. (…) The systemic rejection of the majority of complaints on formalistic grounds, significantly limited the opportunity to seek effective legal remedy.”

The parties acknowledge, under the agreement, their differing assessment of the election and agree to take up their parliamentary mandates and participate in future elections on the basis of the agreed electoral reform in the interest of Georgia’s political stability and in order to implement the agreement.

President Zurabishvili’s statement that she is ready to free Rurua was equally important to the settlement since Rurua is not covered by the EU-brokered document that speaks of an amnesty for those involved in the June 20, 2019 unrest at the parliament building sparked when a visiting Russian MP was invited to address the chamber from the speaker’s chair.

“My decision will be implemented only when the parties sign the final document and enter Parliament, and when the representatives of the EU and the US announce that an agreement has been reached,” said Zurabishvili.

Rurua was arrested on November 18, 2019, for the illegal possession and carrying of a firearm.

The release of Rurua was one demand made by the opposition as a precondition for entering parliament.

UNM refused to sign the agreement, but it promised to enter the legislature after Melia is released. Some UNM MPs, however, individually signed the document.

"The position of the UNM looks ridiculous and infantile—my place in this misunderstanding is no more, [wish you] success,” UNM MP Salome Samadashvili wrote in her farewell Facebook message after she signed the agreement.

Georgia's April PPI climbs at fastest rate in a decade