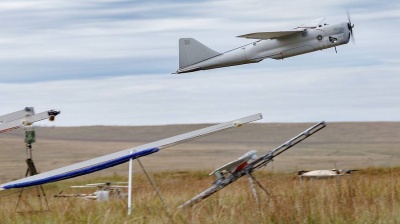 An Orlan 10 drone during launch.
By bne IntelIiNews September 24, 2020

The Kavkaz (“Caucasus”) large-scale military exercises have for the first time used a “swarm of drones” against ‘enemy forces’, Tass reported on September 24.

The Kavkaz 2020 drills, running from September 21- 26, involve around 80,000 personnel, including from the Russian National Guard and 1,000 servicemen from Armenia, Belarus, China, Myanmar and Pakistan. Representatives from Azerbaijan, Indonesia, Iran, Kazakhstan, Tajikistan and Sri Lanka are participating as observers. India cancelled its planned participation.

As well as Forpost, Orlan-10 and Eleron-3 military drones, around 250 tanks, up to 450 mechanised infantry fighting vehicles and APCs, as well as up to 200 artillery systems and multiple-launch rocket systems, are being used in the war games, according to the Russian defence ministry. Iranian warships were expected to attend the drills that gauge battle readiness, Iran’s defence ministry said.

Around 12,900 troops would take part in activities in line with the 2011 Vienna Document of the Negotiations on Confidence and Security Building Measures, Russian defence officials said.

Kavkaz 2020 is taking place in Russia’s Southern Military District in the North Caucasus, mainly at the Kapustin Yar and Ashluk training grounds and on the Black and Caspian Seas.

The US government via the US Agency for International Development (USAID) in partnership with the Kazakh Ministry of Energy has launched a five-year and $39mn regional energy ... more

Over 10,000 financiers in Kazakhstan, Kyrgyzstan, Tajikistan and Uzbekistan have participated in the Regional Small Business ... more

The Eurasian Development Bank (EDB) is set to provide a five-year loan facility for a total of RUB12bn (€135mn) to set up production of axle drives and a foundry in an ... more