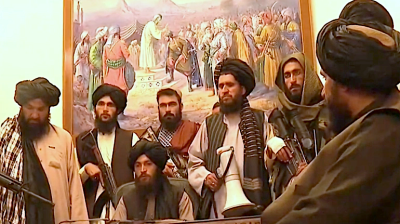 Taliban seen in the presidential office in Kabul after taking over Afghanistan in August last year following the US exit. / bne IntelliNews
By Ben Aris in Berlin September 28, 2022

Russia has signed off on a preliminary deal to provide the Taliban with oil, gas and wheat, Afghanistan’s Acting Commerce and Industry Minister Haji Nooruddin Azizi told Reuters on September 27.

The agreement marks the first international economic deal that the Taliban administration has signed since coming to power. It is seen as the first attempt by the regime to open the country up and improve trade ties with its Central Asian neighbours.

Azizi said Russia would supply 1mn tonnes per year of gasoline, 1mn tpy of diesel, 500,000 tpy of liquefied petroleum gas (LPG) and 2mn tpy of wheat per year. No details of pricing were released, but Azizi confirmed that the Taliban would buy the commodities at a discount to global prices.

The Taliban have faced a severe economic crisis since taking control of Afghanistan in August 2021, following the hasty withdrawal of US occupying forces. Washington froze $7bn of Afghan central bank reserves held in the US following its departure. The Taliban took over an economy in tatters and increasingly dislocated.

Moscow rapidly but tentatively moved to fill the void and, despite maintaining the designation of the Taliban as a terrorist organisation – while at the same time in recent months agreeing recognition for a Taliban delegation in the Russian capital – has been actively working to improve relations with Kabul as Russia is interested in opening up a southern economic and transit corridor via Central Asia to tap extensive markets in South Asia.

Azizi said the Taliban was working to diversify its trading partners and that Russia had offered the Taliban administration a discount to average global commodity prices.

Under Western sanctions, Moscow is keen to find new non-aligned markets that are not participating in the sanctions regime. It is offering steep discounts on key commodities to new partners.

The Taliban is widely seen as a terrorist organisation by the international community and no country has formally recognised its leadership since Taliban forces swept into Kabul to re-establish the control the fundamentalists had two decades ago prior to 9/11 and the subsequent arrival of US forces.

However, many countries in the region are eyeing improved relations with Afghanistan. It is home to an estimated $1 trillion in natural resource deposits and, it is often forgotten, occupies the key strategic location linking Central Asia to South Asia. Afghanistan’s lithium deposits are thought to be especially large.

Other Central Asian states, led by Uzbek President Shavkat Mirziyoyev, remain keen to improve relations with Afghanistan and stabilise the country. An exception here is probably Tajikistan, which views the Taliban with some hostility.

Even before the Taliban took back control, Mirziyoyev identified Afghanistan as the key security issue in Central Asia. He once used a speech at a UN General Assembly summit to call for an international stabilisation effort to be made for Afghanistan.

Azizi said the Russian commodities arrangement with the Taliban would run for an unspecified trial period, after which both sides were expected to sign a longer-term deal if they were content with how things stood, Reuters reported.

The deal was finalised after an Afghan technical team spent several weeks in discussions in Moscow. It stayed on in the city after Azizi visited last month.