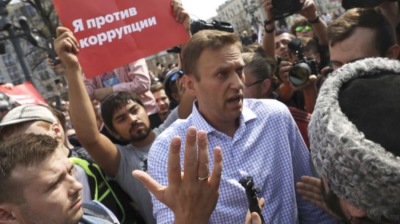 A Moscow court is due to rule that Team Navalny's organisation is an extremist group, which would expose its workers to criminal charges and lengthy prison sentences.
By bne IntelliNews April 30, 2021

Team Navalny, the informal organisation behind jailed anti-corruption activist and opposition politician Alexei Navalny, has closed down its regional network in anticipation of a court ruling labelling it an “extremist” organisation.

The organisers said they didn't want to expose the organisation’s workers to possible criminal charges of supporting extremism that carry up to six years in jail.

Writing on Telegram, Navalny’s aide, Leonid Volkov, who is based in the Baltics, said that many of the offices' workers could face criminal charges if the activist group is branded as extremist.

“It is impossible to work under these conditions. We’re officially dissolving Navalny’s network of headquarters,” Volkov wrote, as cited by Reuters, adding that there would be no attempt to relaunch the organisation under a different name. However, while the local branches themselves will no longer exist, the regional network will atomise and continue as before, but as independent individuals.

Papers charging the Anti-Corruption Foundation (FBK) and other organisations associated with Navalny were submitted to Moscow courts last week and a formal ruling is expected within the next week. Branded extremist and the organisation will be effectively banned, unable to organise protests or even agitate in elections without its activists facing serious criminal charges.

Team Navalny set up offices across the country to prepare opposition in this September’s Duma elections, where it had planned to promote its “smart voting” strategy, encouraging voters to vote for the most likely candidate to win that is not from the ruling United Russia Party.

The decision to ban the organisation is a follow-through from the arrest and sentencing of Navalny in January. Now he is in jail and the Kremlin has been sanctioned by the West as a consequence, the Kremlin has clearly decided it has nothing to lose from following through and crushing Navalny's organisation completely.

Moscow prosecutor’s office has formally charged the FBK and Navalny’s Citizens’ Rights Protection Foundation as extremist organisations intent on organising a colour revolution in Russia. Both of these groups have already been designated as “foreign agents” by the Ministry of Justice, which precludes them from politics in Russia.

Other groups on the extremism list include Islamist organisations Al-Qaeda and the Taliban, and the Ukrainian nationalist movement Right Sector.

“Under the guise of liberal slogans, these organisations are engaged in creating conditions for destabilising the social and socio-political situation,” the prosecutor’s office statement said previously.

The Moscow City Court have already ordered the organisations to cease and desist in anticipation of the court hearing, and the prosecutor’s office ordered Navalny’s headquarters to stop operations, effectively forbidding it from organising events or posting any new content online.

The gag order will severely hamper Navalny's anti-corruption campaign, which makes heavy use of YouTube video exposes of corruption at the highest levels. A documentary on “Putin’s Palace” accusing the Russian president of owning a luxury mansion on the shores of the Black Sea garnered over 50mn views in just two days when it was released in January.

Navalny is currently a two-year and eight-month jail term for breaking parole conditions after he was given a suspended sentence in 2014 in a corruption case. He was found guilty of embezzling RUB30mn ($400,000) from two companies, including the French cosmetics brand Yves Rocher. Navalny claims the case was politically motivated.

While the court ruling will effectively ban any formal organising by Team Navalny, Volkov said that the campaign against the powers that be will continue informally, with Navalny supporters acting as “independent socio-political” actors.

"Some regional staffs will be shut down, but the majority will continue to work as independent regional socio-political movements," Volkov said on YouTube on April 29. "We are no longer able to finance them, we cannot help them with design or IT solutions, and we will not set tasks for them," he added.

The individuals will continue to carry out research, will participate in elections and public campaigns, and will organise rallies, Volkov said.

Much of the evidence in the court case is a state secret, meaning the Russian public may never learn the basis of the case. An attorney for Navalny’s organisations, Ivan Pavlov, said the classified materials in the case added up to 900 pages, but that it was not clear why the materials were classified, and announced plans to challenge the secrecy classification.

He said they were reference materials related to investigations and cases against Navalny and the Anti-Corruption Foundation.

“We do not understand what the basis for the classification was,” Pavlov said. “If Alexei needs a biography of his persecution, collected in one place, then it is in the Moscow City Court.”

Earlier investigative reporters showed that a team of FSB officers had been tailing Navalny for months, following and documenting his movements as he travelled around the country organising his regional opposition offices and tactics. Presumably this intelligence is being used as the basis of the evidence against him and his organisation.

Separately Navalny appeared in court via video link on April 29 in the appeal hearing against a separate conviction passed down in February for libelling a WWII veteran.

Navalny, looking thin, appeared in court for the first time since ending a hunger strike. He lost the appeal.

Navalny took the opportunity to launch a broadside against the Kremlin and his jailors. Navalny said the Moscow prosecutor’s ban of his organisations was an attempt “to make extremists of me and people like me, patriots of the country who protect the country from you traitors.”

He called Putin a “emperor without clothes,” and said that “twenty years of his fruitless rule have come to this result: the crown is slipping off his ears, there are lies on television, we have wasted trillions of rubles and our country continues to slide into poverty.”

Navalny has a knack for making colourful slurs stick. He famously dubbed the ruling United Russia Party the “party of crooks and thieves,” which it has been unable to shake off. More recently he labelled Putin the “old man in the bunker,” which also set off a fountain of memes on social media.

During this week’s court hearing he accused Putin and his government of “turning Russians into slaves.”

Navalny's wife attended the court appearance and he asked her to stand up so he could see her.

“I’m awfully glad to see you,” he said, and she responded that it was good to see him too. He said he weighed 72kg, down from 80kg on his arrest and “I certainly look like a skeleton.”

On the same day news emerged of another criminal investigation that had been launched earlier this year but not made public, in which Navalny and his allies Volkov and Anti-Corruption Foundation director Ivan Zhdanov are accused of setting up an organisation that infringes on the person and rights of citizens. The alleged offence carries a penalty of up to four years in prison. Zhdanov, like Volkov, is also in self-imposed exile.

Volkov tried to remain upbeat and said the fight would go on.

“All out hellish work over these four years and all your support was not in vain,” Volkov said on Telegram. “You and I have sown the seeds of freedom all over Russia. The seeds will sprout. The seeds will germinate. There is no longer a network of Navalny’s Headquarters, but there are dozens of powerful and tough regional politicians, and thousands of their supporters. There are strong and independent political organisations which will engage in investigations and elections, public campaigns and rallies.”

Only two dozen people were arrested in Moscow during the mass rallies called by Team Navalny; however, since then the authorities have been using information garnered by the new street surveillance cameras and facial recognition technology to make arrests of those that attended.