Tehran and Moscow will create a joint trade council 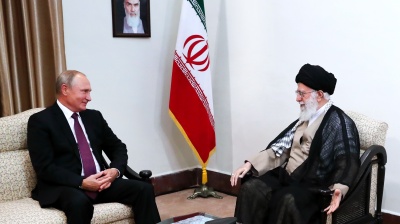 An Iranian-Russian Trade Council will be established to remove obstacles to industrial and commercial cooperation between the private sectors of the two countries, IRNA reported on November 30.

The council will be established as a joint body between the Russian Union of Industrialists and Entrepreneurs (RSPP) and the Iranian Trade Promotion Organisation (TPO). The council comes as trade between the two partners continues to expand as Western companies leave the Russian market due to sanctions placed on the country because of the Kremlin's war against Ukraine.

The council will officially begin work on November 30, simultaneously with a visit to Russia by a trade delegation from the Iranian province of Isfahan, consisting of 50 people.The Iranian delegation will be headed by TPO head Alireza Peyman-Pak.

During the visit to Russia, which is aimed at strengthening and developing provincial cooperation between Iran and Russia, Iranian businessmen will hold several meetings with their Russian counterparts in Moscow and then travel to St. Petersburg to explore further possibilities forcooperation.

The Iranian delegation's visit to Russia follows a recent visit by a senior federation trade delegation to the Islamic Republic.

On November 15, a Iranian-Russian business forum was held at the Espinas Palace Hotel in the Iranian capital Tehran, where Iranian and Russian traders and officials exchanged views on expanding economic cooperation.

The event, organised by the Iranian Chamber of Commerce, Industry, Mining and Agriculture (ICCIMA), was attended by a Russian delegation of 120 people, as well as businessmen and officials from Iran.

According to an April report from the Islamic Republic of Iran Customs Administration (IRICA), in the latest Iranian calendar year (ended March 20), trade in goods between Iran and Russia amounted to $4.63bn.

Earlier in November, Assistant to the President of the Russian Federation Igor Evgenyevich Levitin also visited Iran as part of a high-ranking delegation to meet with Rostam Qasemi, the former Minister of Transport and Urban Development of Iran, and discuss expanding transport links.