TEHRAN BLOG: Now is no time to appease Trump 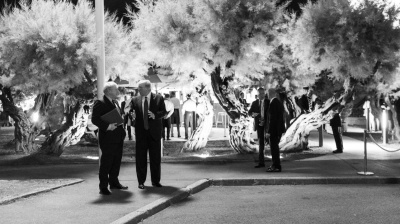 It’s boorishly clear by now. There’s American justice and then there’s international justice. The former is backed up by little yapping lapdog Britain, desperate for its US trade deal. The latter is not taken seriously by Washington. And the rest of the world can go stuff itself.

That’s the only reading that can be taken from Donald Trump’s behaviour, and comments thereafter, surrounding the American assassination in Iraq of second most powerful Iranian official Major General Qasem Soleimani—and the pitiful BBC Breakfast TV performance from UK PM Boris Johnson on January 14 in which he said the 2015 Iran nuclear deal (aka as the “JCPOA”) should be replaced with a “Trump deal”.

"Let's replace it with the Trump deal. That's what we need to see. President Trump is a great dealmaker by his own account, and by many others. Let's work together to replace the JCPOA and get the Trump deal instead", said the brown-nosing Johnson. Excuse Tehran Blog while it reaches for the sick bag.

bne IntelliNews has been cautioning for many weeks that Johnson, who needs grand bargains with the US to counter the difficulties the UK will face once it exits the EU, was set to suck up to Trump on Iran.

The lamentable Johnson’s sycophancy came more or less in parallel with news that Britain, France and Germany have triggered the JCPOA dispute resolution mechanism that could lead to UN sanctions being reimposed on Tehran and the collapse of the nuclear deal. Officials of Europe’s major powers have been spreading the word that they fear Iran could be less than a year away from possessing the means to develop a nuclear bomb—but really, if that’s the case, whose fault is that? The accord was meant to shield Iran from major sanctions in return for compliance with measures barring its way to a nuclear weapon. That compliance, as independently verified by UN nuclear watchdog inspectors, was entirely forthcoming but in May 2018 the malign and narcissistic Trump—no deal can ever be any good unless it is made by him—unilaterally pulled the US out of the JCPOA, arguing brutal sanctions should be used to force Iran into a tougher agreement.

It was a breach of diplomatic convention and Europe said it would stand by the deal and protect Iran’s trade and economy from Trump’s sanctions. But it singularly failed to do so. Iran, urgently trying to press the Europeans to offer some assistance as its economy crumbled under the US “economic attack”, started incrementally dropping its level of JCPOA compliance—and last week effectively scrapped compliance, stating that while UN inspections could continue it would no longer abide by any uranium enrichment limits.

And yet all the UK can do is talk about Iran’s “systematic non-compliance”. How about Trump’s non-compliance with an international agreement? How about Trump giving the middle finger to the world as he assassinates the de facto military leader of a sovereign nation on the territory of a third country with which he did not even consult (an “illegal act of war” as outlined by international law and Middle East scholar David Mednicoff from the University of Massachusetts Amherst in The National Interest but “American justice” as described by Trump to an Ohio rally)?

Europe’s powers (minus the UK, which is probably a lost cause under Johnson) and defenders of democracy everywhere had better get real. Iran is certainly not the home of the loveliest regime in the world but there is a far worse threat to world peace and human rights sat in the White House. Now is no time to appease him. The norms of good behaviour are being degraded and dictators everywhere are taking their cue.

Instructive was how ludicrous liberals in the US spent days intensively exploring whether it was true that Trump acted against Soleimani because he feared the US embassy in Baghdad was in imminent danger of an Iranian attack (he later expanded this scenario on Fox TV to four US embassies possibly facing such an attack, although curiously Trump officials had not mentioned any such thing during scrutiny conducted by Congress). As if Trump plays by the rules!! On January 13, the commander-in-chief matter-of-factly informed the world that actually “it doesn’t really matter” whether Soleimani posed an imminent threat to the US or not.

And, according to the dark international order he sees unfolding with extraterritorial jurisdiction available to the US only, he’s damn right, it doesn’t. As his Secretary of State Mike Pompeo made clear as this week got under way, the slaying of Soleimani is part of a broader strategy of deterring challenges by US foes around the world.

In a speech at Stanford University's Hoover Institute, entitled "The Restoration of Deterrence: The Iranian Example," Pompeo made no reference to the threat of imminent attacks planned by Soleimani.

"The importance of deterrence isn't confined to Iran," Pompeo said. "In all cases, we must deter foes to defend freedom. That's the whole point of President Trump's work to make our military the strongest it's ever been."

It’s this blog’s contention that if the plans of the Trump administration come to their logical conclusion, helpings of “freedom” will one day only be dished out on the ‘big man’s’ say-so. It may seem counter-intuitive, but siding with the Islamic Republic when it comes to the nuclear deal and the illegal Soleimani assassination is all part of the struggle to make sure that this is never the reality.

Will the upcoming Biden Presidency be good for Ukraine? The answer is yes, but there are questions that must be answered.