TEHRAN BLOG: Will the protests be crushed or could the Islamic regime fall? 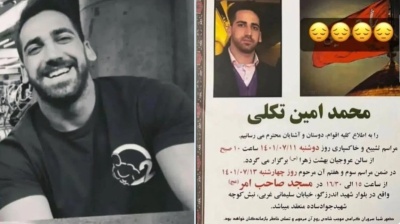 On @1500Tasvir on Twitter, Iranians attempt to document the protests. The photograph is said to show Mohammadamin Takoli, who allegedly suffered a brain injury and died after being hit with tear gas at a close distance. / @1500Tasvir
By bne IntelIiNews October 5, 2022

Opinion is divided among Iran watchers as to whether the anti-regime protests that have swept the country for nearly three weeks can end in any way except with a crushing of the demonstrators.

On October 5, the Guardian published an analysis asking, “Are the protests in Iran just doomed to flare and then be crushed?” while CNN went with the headline, “A barrier of fear has been broken in Iran. The regime may be at a point of no return.”

The Islamic Republic regime, meanwhile, organised more counter-protests and continued to describe the protesters as “rioters” guilty of “sedition”. Notably, recent days have seen the protests, in which at least scores are known to have lost their lives, feature an increasing number of acts of defiance led by schoolgirls, while more and more university campuses have been turned into battlegrounds with students attempting to continue their protests while evading security forces.

October 5 also saw Tehran summon the British ambassador to Iran, accusing UK officials of trying to provoke further unrest in the country, while Iranian prosecutors opened a probe into the death of a teenage girl in the capital during the early days of the protests. Nika Shakrami, who would have turned 17 at the weekend, has become an icon for the anti-government movement. Officials have told state media she fell from a roof, but that her death was not linked to the protests.

RFE/RL’s Farda Briefing on October 5 was headlined, “Despite weeks of protests, survival of Iranian regime not threatened.”

It reported: “There are no major divisions within the establishment or the security forces. There have been no major strikes like the ones that preceded the Islamic Revolution in 1979.

“Even so, prominent rights advocate Nasrin Sotoudeh told TIME magazine that there is ‘a very real possibility of regime change.’”

Looking at how previous waves of protests have indeed been crushed during the more than four-decade-long history of the Islamic Republic, the Guardian analysis included the observation that “if the past is a tutor, it is easy to write the obituary of this round of protests”. However, the article also noted: “Yet Iran has this capacity to surprise. Any reading of The Pride and the Fall, Anthony Parson’s self-reproachful account of his failure as British ambassador to Tehran to predict the toppling of the Shah of Iran in 1979, knows Iran can leave the closest observer dumbfounded.”

It also pointed out: “Few would have expected these demonstrations to have lasted as long as three weeks, even if their scale, hard to judge from the west, waxes and wanes. And it appears as if the Iranian leadership is caught off balance and nervous about the way its legitimacy is being challenged by this new phenomenon of a leaderless unarmed revolution, which is even drawing in schoolchildren.”

Prominent supporters of the protests now include a group of French female film stars led by Oscar winners Juliette Binoche and Marion Cotillard. They have posted videos of themselves cutting their hair in support of the women in Iran protesting the death of Mahsa Amini. It was the death of Amini, following her arrest by Tehran morality police for allegedly wearing her hijab loosely, that sparked the first protests.