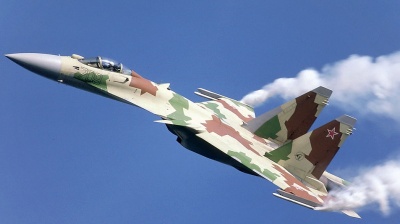 Russian Su-35 fighter jets ordered from the Kremlin by Tehran should arrive in Iran at the start of the next Persian calendar year (starts March 21), Shahriyar Heydari, a lawmaker who is a member of the National Security and Foreign Policy Commission of the Iranian Parliament (Majlis), has informed Iranian news agency Tasnim.

Heydari was also quoted as saying by Tasnim that Iran has placed orders with Russia for missiles and helicopters and other defence systems “and most of these weapons will soon enter the country”.

Russian media reports have indicated Iran could acquire from 24 to 60 of the 4++ generation Su-35 fighters.

The speculation is that Moscow gave the final nod to the provision of Su-35s to Iran partly in gratitude to Tehran for supplying hundreds of combat drones tht the Russians have used to attack Ukraine. The Su-35s and drones could be part of a bartering arrangement. There is no firm information on whether Iran has, or is prepared to, supply the Russian armed forces with ballistic missiles.

An analysis by Can Kasapoglu—a non-resident senior fellow at Hudson Institute and the director of the Security & Defense Research Program at EDAM—published by National Interest on January 6 cautioned: “Taking advantage of Russia’s growing reliance on low-cost Iranian weapons amidst its stumbling campaign in Ukraine, Iran is now set to procure dozens of Russian Su-35 aircraft. While some Western assessments tend to downplay the gravity of the acquisition, claiming that it would not drastically alter the airpower balance in the Gulf, the Su-35 would give an unprecedented boost to Tehran’s control over the Iranian airspace. Such a capability development effort is particularly dangerous as the regime is moving closer to a nuclear bomb.

“More importantly, the ambitious barter of Russian Su-35 fighters in return for Iranian drones, and probably ballistic missiles, manifests a grim calculus for the West. Contemporary military transactions between Tehran and Moscow have unveiled a new geopolitical episode. Washington and its allies are now facing a more aggressive and hostile axis than ever.”

In another look at the prospective Su-35 deal, 19fortyfive wrote last August: “Iran wants new jet fighters as it is depending on Cold War-era designs such as the American F-14 Tomcat and the Soviet Su-22 Fitter. An Su-22 just crashed in Iran this month. An F-14 went down due to an accident in June.”

In further comments on the anticipated fighter jet deal, the trade journal wrote: “There are two dimensions here for analysis. The first is the tactical aspect of the trade – if it indeed happens. The barter ‘scratches both itches’ and will help each side with capabilities that are needed badly. Iran’s air force is woefully under-equipped while Russia’s drones have not faired well during the war in Ukraine.

“The second aspect of the deal is strategic as it pertains to broader international security goals for both countries. Russia and Iran are growing closer in their relationship. This is bad news for NATO and unwelcome tidings for Israel and Saudi Arabia, plus other Gulf allies.”

The aircraft is equipped with advanced avionics, including a powerful radar system and can carry a wide range of air-to-air and air-to-ground weapons. It is also equipped with an advanced electronic warfare suite, which gives it the ability to detect and jam enemy radar signals.

The aircraft is billed as having a sleek and advanced aerodynamic design with a large wing area and thrust vectoring engines, giving it a high level of manoeuvrability and agility.

It is considered as one of the most advanced fighter aircraft in the Russian inventory and has been exported to countries including China, Indonesia, and Egypt.

Polish proposed ban on Russian rubber may give the European tyre industry a flat
4 hours ago
Prague to have a new municipal government after record-long negotiations
9 hours ago
Party congresses of Hungarian opposition demonstrate deep divisions
9 hours ago
At least 500 dead after huge earthquake hits Turkey, Syria in early hours
9 hours ago
Turkish minister tells US ambassador ‘Take your dirty hands off Turkey’ as sanctions sparks fly
15 hours ago