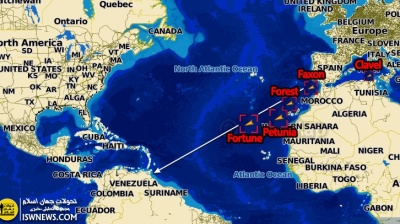 The latest positions of the five tankers as presented by ISWNews.com.
By bne IntelIiNews May 18, 2020

Iran’s foreign minister has warned the US not to engage in “piracy” by interfering with five Iranian tankers laden with fuel that are sailing towards Venezuela.

In a letter to UN head Antonio Guterres on May 17, Mohammad Javad Zarif cautioned the US against “sending troops to the Caribbean Sea with the aim of interfering with the transfer of Iran’s fuel to Venezuela”. Zarif added that the US must “give up bullying on the world stage” and respect international maritime law. Any US move against the shipments would be “piracy and a major peril to international peace and security”, he also said, according to a statement posted on the Iranian Foreign Ministry website.

Meanwhile, Abbas Araqchi, Iran’s deputy foreign minister, summoned the Swiss ambassador in Tehran and issued a warning. He told the Swiss, who represent US interests in Iran, that any US threat against the tankers would be met with an “immediate and firm response.”

A senior US official told Reuters on May 14 that the US was considering what action it could take in response to Iran's shipment of fuel to crisis-stricken Venezuela.

Both Iran and Venezuela are under heavy US sanctions that thwart or block their international trade, but there would seem to be a little to stop them operating outside of international channels to trade or barter with each other. The threat of more sanctions from Washington in response would not likely disrupt their trading relationship given that both countries are so heavily sanctioned already—Venezuela to the point that its refining industry has been hugely impeded by a lack of parts and maintenance amid an economic crisis and Iran to the degree that it is searching high and low for petroleum revenue-operating opportunities with countries that are prepared to ignore or work around the ultra-aggressive Trump administration sanctions imposed on Tehran.

The five Iranian tankers are estimated to be carrying at least $45.5mn in fuel, with four of the vessels—Petunia, Fortune, Forest and Faxon—already in the Atlantic after passing through the Suez Canal and Mediterranean, according to ship tracking service MarineTraffic, as cited by RFE/RL. One of the vessels, the Clavel, was reportedly still in the Mediterranean as of May 18.

Elliot Abrams, the US State Department's Venezuela envoy, last month claimed that Venezuela is paying Iran in gold to help its troubled energy sector. He denounced the growing cooperation between Washington's two adversaries.

Political analysts see US President Donald Trump as needing a big foreign policy victory as he steps up his re-election campaign. Toppling Venezuelan President Nicolas Maduro might be chalked up as such a victory. On the other hand, the sight of two of his biggest adversaries, Iran and Venezuela, helping each other to thwart plans of his administration might be a vote loser.

A hardline Iranian analyst has suggested Iran might retaliate against US vessels in the Gulf if Washington took action against the Iranian fuel tankers. “The US Navy and its allies in the Persian Gulf are hostages to any kind of violation against Iran’s legal international shipping,” Mahdi Mohammadi said on Twitter.

“Before coming to any decision, Trump should ask his friend [British Prime Minister] Boris Johnson about the details of the British tanker experience,” he said.

Iran seized a British-flagged tanker in the Gulf last year after British forces detained an Iranian tanker off the territory of Gibraltar. Both vessels were released after a months-long standoff.

“News received from informed sources indicate that the US Navy has sent four warships and a Boeing P-8 Poseidon from the VP-26 squadron to the Caribbean region,” Iranian news agency Nour, which is close to Iran’s Islamic Revolutionary Guard Corps (IRGC), reported at the weekend.

A Venezuelan official said last month that his country had received refining materials by air from Iran to help it start a unit at the 310,000 barrel per day (bpd) Cardon refinery, which is required to produce gasoline.