The Belarusians struggle at home and abroad 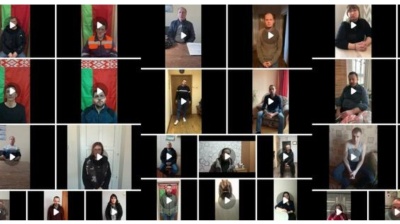 A collage of some of the 38 "repenting videos" released by Belarusian authorities on Thursday morning, where arrested railway workers are forced to "admit" to various crimes and to their participation in sabotaging the state railways. / Twitter.com/HannaLiubakova
By bne IntelIiNews April 1, 2022

Last night, the Pentagon and Ukrainian intelligence reported that Russian troops had started pulling out of the Chernobyl region. According to independent Belarusian media, about seven medical buses had arrived at the Republican Scientific and Practical Centre for Radiation Medicine and Human Ecology in Gomel (south-eastern Belarus).

These developments are indicative of both that Russia is repositioning to focus more on eastern Ukraine, and that those Russian forces have suffered from more than just Ukrainian fire from light anti-tank weapons.

Meanwhile, more Russian troops in Belarus has meant more interaction with the locals. Videos and stories have come out of Russian soldiers driving around towns looking to buy vodka, sex and yelling at Belarusian girls that “when we return you will fight over us,” while bragging that they had brought “bundles of dollars and hryvnias” from Ukraine.

The Russian army hasn’t been making itself popular with Belarusian locals lately. On Tuesday, 29 March, a Russian military truck hit a civilian vehicle on a highway.

This is not the first time that Russian troops have been reported as having behaved badly in Belarus. When a large number of soldiers were first brought to the Belarusian regions bordering Ukraine, reports soon came of Russian soldiers looting private storages and asking around to trade petrol for vodka.

Some locals said that when they called the police, they just hung up the phone, while some said they were too afraid to call the police. Either way, nobody wanted to put up a fight against the young, frustrated men with guns if they came to loot a storage house.

At home, Belarusians are already being harassed by the country’s own security forces in their relentless hunt for political enemies of Lukashenko. Now, countryside folks must put up with looting of Russian soldiers and girls being harassed on the streets in the town. All the while Ukrainians and Poles harass Belarusians for not putting up more of a fight against their dictatorship.

Lukashenko’s participation in the war will be viewed by the Ukrainian government as equal to Russia’s and it is currently trying to convince Poland and the Baltic states to join it in closing all borders with Russia and Belarus. The Belarusian government and state servicemen of all kinds are seen as traitors by the Ukrainians, and ordinary Belarusians are also taking some of the blame.

Belarusians have allegedly been harassed in Georgia, Poland and Ukraine for being spies or collaborators in Russia's invasion plans.

The exiled Belarusian opposition has worked hard to turn the image of Belarusians around in the old Eastern Block countries, such as promoting the Belarusian battalion in Ukraine (now a part of the Ukrainian Armed Forces), asking UN Leaders to recognise Belarus as occupied as well as arranging meetings with the Polish government to secure recognition and help for Belarusians fleeing to Poland from Ukraine.

Many Belarusians, mostly men, have fled the country since the war started for fear of being drafted. However, some people have stayed, and many of those who dared to publicly display their solidarity with Ukraine on the streets of Minsk have been arrested.

Some even tried to challenge the Lukashenko regime’s support for the Russian war machine. Since the war started the attacks by Belarusian partisans on the state railway system have been so numerous that the regime hasn’t been able to keep up, until now.

Last week, Belarusian state authorities warned that the Belarusian security service KGB would start looking into how the state railway’s workers could be connected to the sabotage actions that have taken place.

On the night of 30 March, a new relay cabinet was burnt along one of the railways transporting Russian troops.

On 31 March, 38 videos were released by the KGB which showed people apologising for and confessing to crimes; most likely often to crimes they didn’t commit, and more people are reported to have been arrested. The KGB has likely been biding its time while trying to follow as many participants as possible.

The question remains whether this will deter further active opposition within the country or not. Belarusians all around the country (especially in the border areas) and of all ages aren’t exactly becoming happier, either with the regime as a whole or with its support for the Ukrainian invasion.

It is to be hoped that active resistance will continue, and inspire political changes in a post-war period. So far, the Belarusians have indeed done what they could and are doing what they can to make a change in their own country. However, the regime’s control over the public sphere has severely solidified since 2020 and public displays of dissent are dangerous.

As exiled Belarusian opposition leader Svetlana Tikhanovskaya said, the Belarusian participation in the war was only possible “because when Alexander Lukashenko, a dictator who has ruled Belarus for more than 27 years, claimed victory in our country’s fraudulent elections less than two years ago, the West did too little.”

This time, the West needs to listen to Zelenskiy, since it didn’t listen to the Belarusian opposition in 2020.

Could casinos be a jackpot for Mongolia’s struggling economy?

Mongolia has rolled the dice before on establishing casinos but without much luck. A renewed attempt to open the country’s first casino in more than two decades is now underway as Mongolia looks for new avenues of economic growth.

Kazakhstan: Swathes of land confiscated from Nazarbayev’s brother ahead of vote

De-Nazarbayevification is a useful electoral strategy, which may explain why the news was announced by Kazakhstan’s ruling party ahead of polls next month.

Couriers for the food delivery service are pressing for better wages. Management calls their organising tactics “offensive” and “aggressive”.

The oil market took a double shock on December 5 when an EU ban on importing Russian oil and an oil price cap scheme were introduced simultaneously. That was followed by a product ban on February 5. The jury is still out on if these will work.

Could casinos be a jackpot for Mongolia’s struggling economy?
55 minutes ago
Africa rallies to Russia’s rescue as EU bans the import of oil products
4 hours ago
Kazakhstan: Swathes of land confiscated from Nazarbayev’s brother ahead of vote
1 day ago
Wolt couriers in Tbilisi go on strike
1 day ago
Jury still out on the effectiveness of the oil price cap scheme on Russian exports
1 day ago