The Black Sea grain deal is about to expire. What is at stake for Africa? 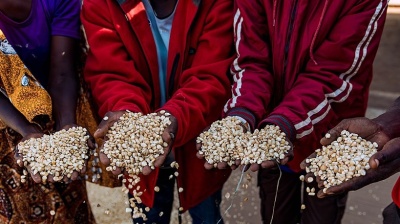 Grain is a staple for African countries already suffering from severe drought. / wikicommons
By Marco Cacciati in Berlin November 8, 2022

On October 29 Russia pulled out of the “Black Sea Initiative” grain deal, brokered by the UN and Turkey last July and hailed by UN Secretary-General Antonio Guterres as “a beacon of hope and relief”. The landmark agreement stabilised global food prices after the spike that followed the Russian invasion of Ukraine in February and narrowly avoided a famine crisis in many African countries, such as Ethiopia and Somalia, already badly affected by severe drought.

The reason for Russia’s recent “suspension” of the deal was an offensive allegedly carried out by Ukraine with British assistance on Russian warships near Sevastopol (Crimea), officially described by Moscow as an attack “on Black Sea Fleet ships and civilian vessels engaged in efforts to ensure the security of the grain corridor”.

Ukraine has neither denied nor taken responsibility for such military operations, while the UK has vehemently denied its involvement.

Russia eventually made a U-turn and re-joined the deal a few days later, on November 2, in what has been described as a “humiliating” move, after mounting pressure from the international community and Turkey. However, the deal is set to expire on November 19, and its extension seems all but certain.

The deal originally included two sides: on the one hand, it guarantees the safe passage of ships carrying grain and vegetable oil from Ukrainian ports towards Turkey and, onwards, developing countries mostly located in Africa and the Middle East; on the other hand, it ensures Russia the possibility of trading food and fertiliser without impediment. The common goal is to provide the developing world, largely dependent on Ukrainian and Russian grain and fertiliser exports, with a steady flow of staple imports.

Before the war, Russia and Ukraine accounted for almost a quarter of global grain exports. The Russian invasion and consequent military activity in the Black Sea strongly hindered the departure of vessels in the first months.

Since the deal came into effect in July, Ukraine has exported more than 10mn tonnes of agricultural products; these figures signal a remarkable improvement, but shipments are still about 40-50% below the pre-war period, according to UN data.

The UN claims that “the prospect of the Black Sea Grain Initiative and the reopening of the Black Sea ports helped to push down historically high market prices. Since April 2022, the FAO Food Price index has been on a downward trend”. However, it points out prices are rising again amid mounting concerns over the impending expiration of the deal and the recent disruptions. 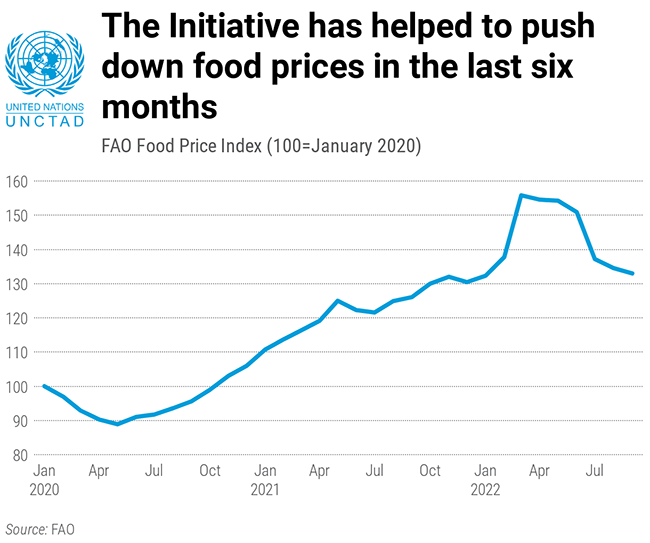 Russia has accused Ukraine of exploiting the deal by exporting grain mostly to Europe and selling it at higher prices, but these claims have been contradicted by the UN, which confirmed that 66% of grain exports are going to developing countries. 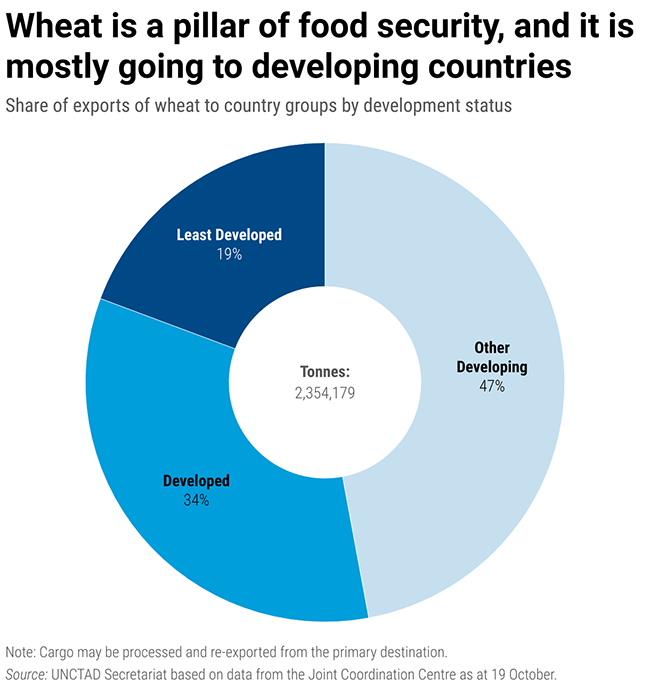 Russia has also lamented ongoing problems with its fertiliser exports, which allegedly continue to be limited by EU and US sanctions, in spite of the July deal. Negotiations on this particular issue are currently underway in the UN and are reportedly “on the right path”; the positive direction of these talks might have played a role in convincing the Kremlin to rejoin the deal a few days after quitting it.

Since the early months of the invasion, Russia has been widely accused of stealing crops from occupied regions. More recently, the Financial Times revealed how Russia is exporting grain stolen from the Russian-occupied region of Zaporizhzhia to Syria, dodging sanctions and Ukrainian maritime surveillance with a combination of fake documents, vessels owned by shell companies and by turning off the ships’ transponders at selected locations.

On top of the military situation on the ground, which remains difficult, these ongoing conflicts over grain and fertiliser exports between the two parts don’t bode well for a smooth renewal of the Black Sea grain deal. Meanwhile in Africa, continued drought and rising food prices are threatening the stability of even the most developed nations like Kenya, as CNN reports.

The IMF warns that “food insecurity has been rising since 2018. Even before Russia’s invasion of Ukraine, the increasing frequency and severity of climate shocks, regional conflicts and the pandemic were all taking their toll, disrupting food production and distribution, and driving up the cost of feeding people and families”.

The IMF report identifies 48 countries heavily dependent on food imports from Ukraine and Russia, named “hunger hotspots” and mainly located in sub-Saharan Africa. These countries “are among the least prepared to face the effects of climate change” and heavily rely on imports from abroad for staples such as grain, corn and rice.

The Black Sea Initiative is a lifeline for sub-Saharan African countries, and has so far prevented global food shortages from taking a turn for the worse. No one can tell with certainty what will happen after November 19. Mr Guterres has called on all the parties involved for the immediate renewal of the deal. Russia, Ukraine and Turkey reportedly “agreed that the deal could be extended automatically on the condition that no party objects”, but the recent floundering on the Russian side underlines the volatility of the agreement and gives cause for concern.

As reported by DW, a famine in East Africa is already likely to break out due to extreme drought. Any failure to renew the Black Sea grain deal on time could unleash a deadly spiral across large swathes of the continent, leading to further instability and igniting new regional conflicts.

The price caps would work by barring Western insurance and shipping companies from insuring or carrying cargoes of Russian oil products unless they were bought at or below the caps, which will be imposed after February 5.

Benefiting from its geographic proximity and historic ties, Italy is already one of the top investors and trading partners of the Western Balkan countries.

OUTLOOK 2023: Ukraine
8 hours ago
OUTLOOK 2023: Russia
9 hours ago
West prepares to impose price caps on Russian petroleum products
18 hours ago
M&A in Emerging Europe fell by 20% to €32.93bn in 2022
1 day ago
Italy pushes for investments into Western Balkan strategic sectors
1 day ago