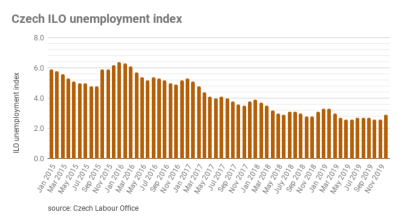 At the end of last year, the number of unemployed job applicants in the Czech Republic reached 215,532, which is the lowest figure since December 1996.
By Nelly Tomcikova in Prague January 10, 2020

Czech unemployment rose from 2.6% year-on-year in November to 2.9% in December 2019, following the classic development curve taking into account seasonal effects, according to the Labour Office of the Czech Republic on January 9.

“In December … the number of vacancies increased month-on-month to reach 341,000. This is up 5% y/y and worker shortages are visible in almost all sectors of the economy. However, y/y vacancy dynamics are slowing - the labour market remains overheated but this tightness is no longer increasing,” said ING Chief Economist Jakub Seidler.

“In winter seasonal work is phasing out, especially in agriculture and construction, and people who have terminated term contracts and agreements, or, for example, self-employed workers who have temporarily interrupted their activities, are already signing to the [Labour Office] Register in greater numbers,” said Labour Office of the Czech Republic Katerina Sadilkova.

“Traditionally, there is a great demand for technical professions across all fields. In some regions and sectors, the lack of labour supply is already among job seekers,” the Labour Office report read.

“While developments this year will be highly dependent on potential recovery abroad, the domestic labour market tightness is likely to weaken. Wage growth should still continue to grow at around 5-6% y/y, according to current estimates,” Seidler predicted.