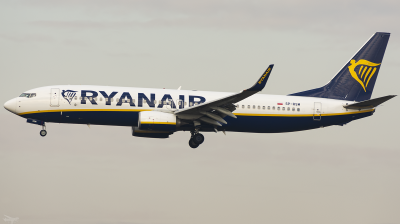 Picture of the Ryanair Flight 4978 / Picture from en.wikipedia.org
By bne IntelliNews January 21, 2022

The UN’s civil aviation agency (ICAO) announced this week that it had completed a report about the investigation into Belarus's diversion of the Ryanair Flight 4978 in May last year.

Belarusian journalist Roman Protasevich and his Russian girlfriend, Sofia Sapega, were detained in May 2021 when Belarus scrambled a military jet to escort their Athens-to-Vilnius Ryanair flight to land in Minsk. Many countries condemned the action ordered by Belarusian strongman Alexander Lukashenko as a "state hijacking" of a passenger aircraft, and this prompted harsh sanctions from Western countries. Belarusian authorities had claimed they acted because of a bomb threat that proved to be false and have condemned the sanctions, even filing a report to the ICAO asking the agency to review the sanctions as illegal.

The report, which was made available to all the ICAO’s 193 member states on January 17, said that Belarus authorities did not follow the regulations to properly contact Ireland-based Ryanair about the alleged bomb threat and did not help the crew to talk to their base, according to Reuters.

The Ryanair pilot agreed to land in Minsk after a Belarus air traffic controller had declared “code red”, which indicates a credible threat to the aircraft necessitating an immediate landing. However, the report found it improbable that Ryanair would have agreed to declare "code red" during the circumstances. Instead, the report concluded that the bomb threat was "deliberately false", but no person or state was identified as responsible for the hoax.

According to a pilot witness, the search for the alleged bomb on the ground was cursory and took only 18 minutes to complete. Meanwhile, emergency services were told to stand down until the search was over and before the luggage hold had been opened for checks. Also, despite the supposed threat, disembarking passengers took 30 minutes and the pilot was allowed to remain on board.

The ICAO fact-finding team was also unsatisfied with some of the information it had been given by Belarusian authorities.

First, it said it was not provided with a satisfactory rationale as to why records had not been preserved considering that local criminal and other investigations were under way. Secondly, Belarus refused to provide access to the Ryanair flight’s controller, to the call records from officials, or to footage from well-placed airport cameras. Thirdly, the team was not given a copy with the email with the bomb threat or email server logs. Instead, it had to use data from a Switzerland-registered email provider, which showed that the email was sent after the jet had begun its descent towards Minsk. Belarus claimed it had received the email 30 minutes earlier; however, the Belarusian authorities could only provide a screenshot as proof.

The ICAO report is the first completed international investigation in the diversion of the Ryanair flight. Belarus Director of the Aviation Department of the Belarusian Transport and Communications Ministry Artyom Sikorsky told Belarusian state news agency BelTA that “together with experts, we are planning to get the facts, which have been submitted by Belarus and which have been presented not quite correctly, clarified by 31 January when ICAO convenes for the session. We expect that ICAO will consider Belarus' complaint against the illegal actions of several European countries that had imposed sanctions against the civil aviation of our country.”