This stadium is not a cemetery: rebuilding Donetsk against the odds 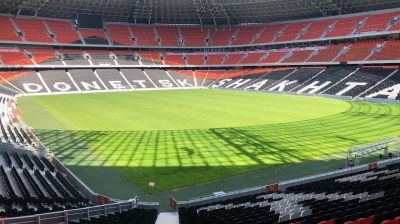 The marshutka driver steps back onto the bus clutching a passport – my passport – and waves me with a frantic hand up to the front. Our minibus, the Sunday morning service from the Russian city of Rostov-on-Don, is the only one to have been flagged down by the officials here at the Uspenka military checkpoint.

I drop down onto the tarmac, and my eyes meet the dead stare of a khaki-clad soldier stood just off, bug-eyed and armed to the teeth. Cyrillic lettering on his sleeve bears the initials of the Donetsk People’s Republic (DPR), the Russian-backed separatist enclave at the heart of Ukraine’s ongoing civil war. The bus driver puts a phone to my ear.

“You cannot go any further,” says a woman’s voice. “You are to return to the customs post. I’m sorry.” The woman, who says her name is Natasha, is the marshutka driver’s wife. Since no one at the camp speaks English, it’s the only way they can find of telling me I have been refused entry to the pariah republic, and must remain here in the Russian outback, a hundred miles from nowhere. It’s four hours until anyone from the DPR foreign ministry is able to bail me out.

The DPR is still at war, despite a ceasefire with the Ukrainian authorities in Kyiv. Border officials get tetchy when anyone tries to enter with a passport that is nether Ukrainian or Russian. There have been alleged cases of foreign nationals coming here to take up arms on both sides, and no one from Western Europe is held above suspicion. 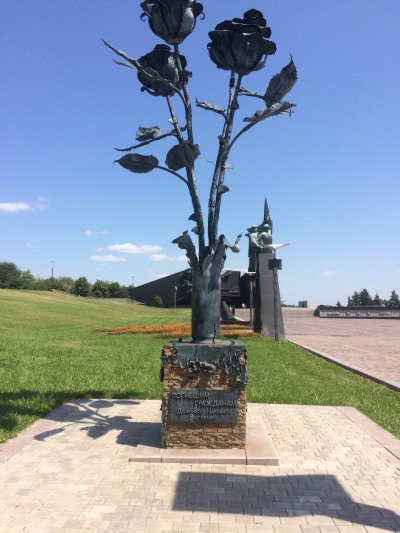 A sculpture at the Donetsk city war museum made from the casing of a rocket fired at the city by Ukrainian soldiers.

“Things had been done wrong here under Kyiv,” says Nikolai Tarapat, an official in the Ministry of Youth Culture, when we meet at the city’s $500m Donbas Arena football stadium. “This is our chance to correct those mistakes.

“For example, the Donbas Arena was being built, but at the same time not a single hole in the children’s sports schools was filled. They were falling apart. We’re trying to restore the structures and principles of the USSR.”

In 2017, the DPR began seizing control of private property in the city, including the stadium and over 40 working mines and steel works owned by the billionaire local oligarch, Rinat Akhemtov. Previously, those facilities had continued to trade with Ukrainian business, paying taxes to Kyiv.

Now, due to a blockade, they work with firms in the neighbouring Luhansk People’s Republic (LPR), another corner of the Donbas to have declared independence in defiance of Ukraine.

“Thanks to the Minsk Agreements, the DPR has the opportunity to explain to foreign powers that we do not want this war,” says Tarapat. “We are not willing to pursue the war. We want negotiations and discussions. We know it takes time. But slowly, step-by-step, we are trying to do things the right way.”

The DPR president, Denis Pushilin, told Donbas Insider in April that his government is prioritising “the establishment of friendly and partnership relations with our neighbours. In particular, we are developing our relations with Russia.”

In 2014, Pushilin declared his only ambition was for the DPR to join an enlarged Russian empire. Indeed, key to the republic’s future will be the enactment of a decree issued earlier this year by Russian President Vladimir Putin to grant Russian citizenship to all residents of Donetsk, which will help lift the DPR out of its political, economic and cultural isolation.

It’s not a look that suits Donetsk. The city is famous for two things: coal, and football. It once enjoyed huge international significance in both. During Soviet times, the mines here were some of the most productive in Europe. Even post-independence, it remained Ukraine’s financial and industrial centre, accounting for more than a quarter of the country’s GDP. Today, the bulk of those mines are owned by one man, the industrialist and football fanatic Akhmetov, who also owns the Ukrainian champion Shakhtar Donetsk, now playing as exiles in nearby Kharkiv.

In Shakhtar’s abandoned state-of-the-art home, I tread the concrete where mountains of food and medical supplies had been stored just months before, shipped here in lorries from Ukraine as part of Akhmetov’s ‘Let’s Help the Children’ aid drive. The mission was shut down in 2017 after Ukrainian nationalists imposed a blockade, barring transportation across the line of contact. Now, Russian aid is the only charity the DPR will accept.

“The DPR hasn’t nationalised the stadium or removed it from its rightful owner,” says Victoria, the stadium guide. “We have just taken responsibility to prevent the full shutdown of these facilities. It’s a practical measure.” Still, no football has been played here now for five years, nor is it likely to be soon. The Donbas Arena was badly damaged when it was hit by shelling in 2014, and the DPR hasn’t the money to carry out a full repair.

“This stadium is not a cemetery,” says the president of the DPR Football Union Igor Petrov, defiantly. “Nor is it a monument or a historical site. It is going to be alive again.”

His colleagues in the DPRFU concur. “With the help of Mr. Putin, the gates are being opened again,” says Viktor Zvyaginstev, a former USSR international and head of the city’s football federation. “That tells us that people are resilient and want to return to normal life. Donetsk is recovering.

“With Mr. Putin’s help, our children can travel and compete all over Russia, and they can develop. Our future is bright again now.”

At the city’s war museum, lead researcher Dmitriy Vyazov shows me items recovered from Ukrainian prisoners of war. They include American flags and military manuals printed on US Navy-issue paper. Nazi paraphernalia allegedly confiscated from Ukrainian soldiers, including a ring featuring the emblem of the SS, lie beside it. Does the museum really believe Ukraine’s army to be packed with Nazi sympathisers? “Of course,” says Vyazov. “Look for yourself.”

They obsess about Ukraine’s ‘fascist’ ideology in Donetsk. But simultaneously they mock Kyiv’s perceived commitment to liberal ideas like gay marriage and LGBT rights. No one seems bothered by the contradiction. 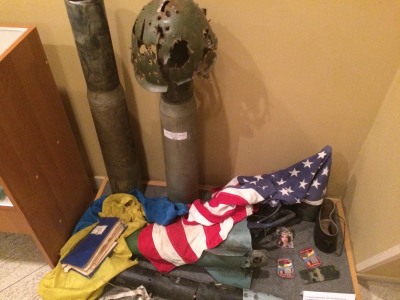 Artefacts in the Donetsk war museum.

The war has changed the shape of economic life here. Recognisable brands have been replaced by Virginia’s Secret and DonMac, after losing their franchise licences. “[The owners] had to keep the fast food restaurants open to prevent people losing their jobs,” says Oleg Antipov, a local journalist and press attaché in the Ministry of Youth and Culture. With big businesses gone, the city’s central market has been revived, and now teems with activity.

Some who left have begun to return. This has split daily life in Donetsk into those who stayed and those who came back. But things have changed whilst they’ve been away. “People’s values have altered,” says Mikhail Glukhov from the Ministry of Foreign Affairs. “Scarcity has taught people a different way of living. Life is more precious now.”

But some things never change. “This war is about connection to our ancestors,” says Tarapat, echoing Donetsk’s sacred connection to the land.

“Throughout history, someone has been trying to grab our land, which is a part of the Russian world, from us. First it was Genghis Khan, then Napoleon, then Hitler. Now Ukraine.

“Who it is doesn’t matter. It’s about our natural resources.”